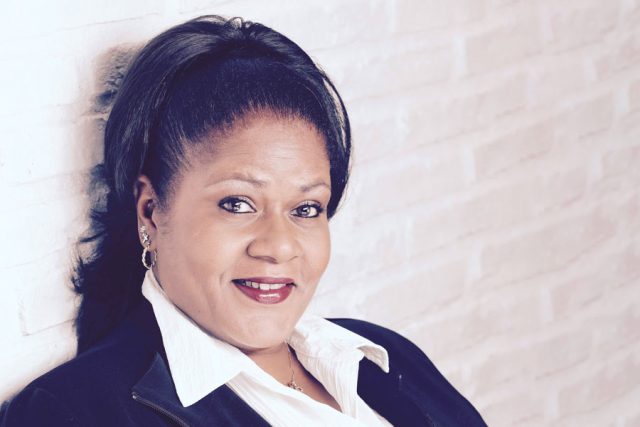 Raised in Winston-Salem, NC, mezzo-soprano Tichina Vaughn has built a standout international reputation while maintaining strong ties to her home state. Tichina’s formal vocal study began shortly after high school at Georgia State University, but her early years were steeped in musical activity: studying clarinet, playing in marching and concert bands, and singing as a choir member and soloist.

Tichina received her Bachelor’s degree in Vocal Performance from the University of North Carolina School of the Arts in 1989.

Even before her graduation, Tichina’s unmistakable voice drew attention from some of the world’s foremost opera houses – and after winning the 1989 Metropolitan Opera National Council Auditions, she joined the Met’s Young Artist Development program and made her stage debut there as Lily in the Gershwins’ Porgy and Bess in 1990.

An Emerging Artist and the Early Years

Tichina’s first leading role on a major opera stage, Amneris in a Seattle Opera production of Verdi’s Aida, arrived just two years later in 1992. Her interpretation sparked immediate attention from the opera community, and invitations to reprise the role began to pour in from companies around the globe. Soon, Tichina was recognized as an emerging Verdian mezzo-soprano, regularly taking on leading roles such as Princess Eboli in Don Carlos and the mezzo-soprano soloist in Verdi’s Requiem throughout the early 1990s.

Fun Fact: Tichina has regularly ventured into jazz, gospel, and other crossover work, including a featured performance at the 50th anniversary of the German State of Baden-Württemberg.

In 1996, Tichina made her European debut as Mistress Quickly in Staatstheater Stuttgart’s production of Falstaff, which marked the beginning of both her long relationship with the company and her robust European career. From 1998 to 2006, she continued to perform with the Staatstheater Stuttgart as a principal artist, eventually earning the distinction of Kammersängerin, the German honorific title for opera singers of the highest merit. Throughout her years in Stuttgart, Tichina’s list of signature roles blossomed as her aptitude for the works of Wagner became evident, culminating with her appearances as Fricka (Die Walküre) and Waltraute (Götterdämmerung) in the Staatstheater Stuttgart’s full recording of Wagner’s Ring cycle via Naxos in 2006.

Now one of opera’s most sought-after mezzo-sopranos, Tichina has quite literally performed around the globe, with previous engagements on international stages including the National Opera Hong Kong, Greek National Opera, Budapest National Opera, Hamburg Opera, Opera Graz, and countless others. She made numerous appearances with the Arena di Verona summer festival in Italy starting in 2003, and from 2010 to 2018, she was engaged as a principal artist at Semperoper Dresden.

In addition to her 1989 Metropolitan Opera National Council Auditions award, Tichina is the recipient of the Opera Index Vocal Award, Living Heritage Foundation Award, the Consul General’s Award for Cultural Diplomacy from the Consulate General Milan, and many other prestigious accolades.

More details on Tichina’s accomplishments, engagements, and signature roles can be found in her official artist bio.

Just as Tichina’s voice sets her apart from her peers, another personal strength is clear in everything she does: her infectious positive spirit. Tichina’s enthusiasm is on display in the series “Behind the Row” on her YouTube channel The GRATITUDE Channel, which features dynamic, impromptu interviews with her costars in the English National Opera’s 2019 production of Porgy and Bess (and, in doing so, highlights the experiences of Black and brown singers from around the world). Though she has taken on several roles from Porgy and Bess over the years, a true full-circle moment arrived in 2019, when Tichina returned to the Metropolitan Opera to reprise the role of Lily for the first time at the Met since her 1990 debut. She can be heard on the 2020 recording of the same production with Angel Blue and Eric Owens, which has been nominated for Best Opera Recording at the 2021 GRAMMY Awards.

An active voice teacher and mentor, Tichina returned to North Carolina in October 2019 and February 2020 as an artist-in-residence at her alma mater, the University of North Carolina School of the Arts. At UNCSA, Tichina led a series of master classes and mentored fellows of the A.J. Fletcher Opera Institute one on one, offering private vocal coaching and individualized career counseling. UNCSA School of Music interim dean Tony Woodcock described the residency as “a real plus for our graduate students as they transition to roles as entrepreneurial professional artists… and all of our voice students (are) inspired by her wisdom and her artistry.”

Though the COVID-19 pandemic is still with us, Tichina has continued to perform with increased pandemic precautions in Europe, including an October 2020 production of Porgy and Bess with Austria’s Theater an der Wien. We can all be hopeful that in-person performances will return to our lives soon, and we look forward to the next move in Tichina’s remarkable artistic path.

Image of Tichina Vaughn by Bashstint – Own work, CC BY-SA 4.0.