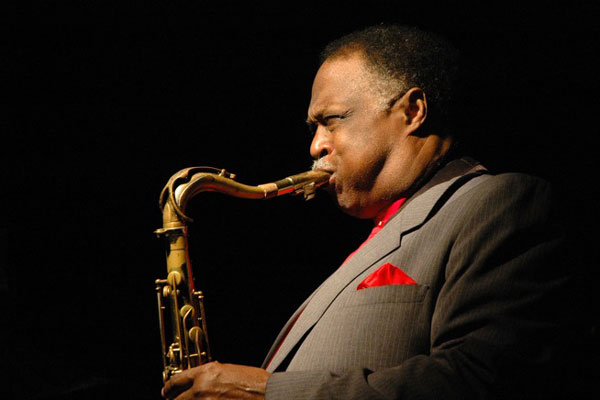 Jazz saxophone virtuoso Houston Person is a prolific performer and record producer whose work spans decades and genres. With a style described as relaxed and distinctly expressive, Person has recorded more than 100 jazz, disco, gospel, pop, and R&B albums and continues to perform well into his eighties. Person plays fluently in styles from hard bop to swing, but he is best known for his influential work in soul jazz.

Born in Florence, South Carolina in 1934, Person began his musical journey by learning to play the piano as a child. At 17 years old, Person received a tenor saxophone for Christmas, which led him to make the switch to the instrument he is famous for today. His classical training continued after high school at South Carolina State College, where he completed his undergraduate degree before enlisting in the army.

After college, Person joined a service band while stationed in West Germany with the United States Air Force, where he played with many notable musicians such as Don Ellis, Eddie Harris, Cedar Walton, and Leo Wright. Person then furthered his music education at the Hartt College of Music in Hartford, Connecticut. During his graduate studies, he gained experience playing in clubs all around New England, practicing and performing with fellow jazz talents before his career took flight.

Fun Fact: In 1999, Person was inducted into South Carolina State College’s Hall of Fame for his contributions to the music industry.

Person’s rise to fame began when he became known for a series of albums with the jazz label Prestige Records in the 1960s. After years of building a career in the jazz circuit, Person made his Prestige debut on organist Johnny “Hammond” Smith’s 1965 album The Stinger. The experience was influential to Person’s style: after he formed a band of his own in the early 1970s, Person continued to feature the organ (a staple of the soul jazz subgenre) in his own music. His first album as a leader was Underground Soul!, released on the Prestige Records label in 1966.

During this time period, Person often worked with late singer Etta Jones. A three-time Grammy Award nominee and 2008 Grammy Hall of Fame inductee for her album Don’t Go to Strangers, Jones met Person while working with one of Hammond Smith’s bands at Prestige. The pair played together for 35 years, with Person serving as her manager and producer until her death in 2001.

A Career in Motion

Though Person is well into his eighties, his career shows no signs of slowing down. In an interview at the San Diego Jazz Party, Person noted that at his age, his wife feels that he should cut back on the month long tours he continues to book. However, Person is dedicated to his music career and cherishes the places it has taken him, stating that “everything I ever did, I stand by. For me, it’s been a wonderful journey.”

Truly an independent artist, Person is also known for self-managing his thriving music career, booking his own appearances and producing his own records. In 1982, Person received the Eubie Blake Jazz Award, a prestigious honor named for the esteemed 20th century pianist, lyricist, and ragtime and jazz composer.

An inspiration and mentor, Person has guided many young musicians in their careers, including jazz pianist Joe Alterman. Despite their 55 year age gap, Person and Alterman have developed a close friendship while playing together at jazz clubs in New York. Person’s best advice to young musicians is to “know your craft. It’s hard work. Get an education, but don’t sacrifice one for the other. Learn to speak for yourself. Blow your horn.”

In an interview with The Orangeburg Times and Democrat,, saxophonist Thomas “Skipp” Pearson recalls living by South Carolina State College and listening to Person practice in the college’s band room alongside jazz greats like Lonnie Hamilton and George Kenny. Pearson has always remembered Person’s advice: “Once you find your voice, the rest is easy, and then you just play from your heart and soul.”

“Preserving the gem: Revered jazz musician credits Orangeburg for his love of the genre” (The Times and Democrat)

“Houston Person: It’s Been a Wonderful Journey” (The Syncopated Times)