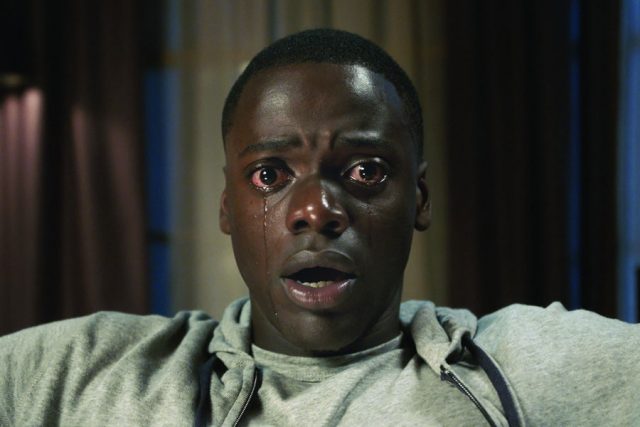 October 29, 2020WDAV BlogNews & Features, UncategorizedHalloweenComments Off on Get Out and Hereditary: Innovative horror film scores to make your pulse race

As horror fans flock to their screens this Halloween, they’ll notice fresh, striking additions to the holiday movie marathon lineup from the past few years. Recent psychological thrillers such as Jordan Peele’s Get Out (2017) and Ari Aster’s Hereditary (2018) are noted for weaving social commentary and family dynamics into the genre, but there’s something else that sets these films apart: their innovative scores.

Director and writer Peele called on classical composer Michael Abels to score Get Out after coming across his orchestral piece Urban Legends on YouTube. While creating a horror movie focused on the experience of being Black in America, Abels explains that it was important to Peele to find a composer who “could have lived some of the scenes that the lead character in this film has lived.” Though Get Out was Abels’ first film score, he was able to pull inspiration from his own experiences as a mixed race African-American man, especially moments in which the lead character “suddenly becomes very aware that he’s the darkest face in the room.”

During their first conversation in pre-production, Abels and Peele began to develop the score with the idea of gospel horror:

“(Peele) told me that he wanted the African-American voice both literally and figuratively in the music, so we talked about African-American music and about how it tends to be hopeful… but what he really loves in horror movies is the unexpected terrifying music, and how can we manage to bring both of those things together?”

Peele also sent Abels examples of music he found unsettling – but that is not typically considered “scary” – including samples of bluegrass, blues, and chanting. Abels melded these influences into a cohesive sound, opting for live instruments like rattles and strings over electronic noises to keep the score connected to the natural world. A great example of this blend is the bluegrass-tinged main title “Sikiliza Kwa Wahenga,” which features a choir of voices chanting in Swahili over an ominous, pulsating rhythm. Abels explains that the whispers are “meant to represent the departed slaves and lynching victims” who are trying to warn the main character, Chris, that he is headed into a nightmare: “Brother, run! Listen to the elders! Listen to the truth! Run away! Save yourself!”

Listen: “Sikiliza Kwa Wahenga,” Get Out

To create the score for Hereditary (2018), director Ari Aster looked to the more avante-garde approach of saxophonist and composer Colin Stetson. Having worked with everyone from Arcade Fire to Tom Waits, Stetson is known for his inventive solo records and has scored films ranging from Westerns to thrillers – but Hereditary presented a unique challenge.

The film relies very little on jump scares, instead building a sense of slowly increasing dread, and Stetson wanted to mirror this by avoiding “cheap horror tropes” that would not line up with the film’s revelations. In the beginning stages of the project, Aster explained to Stetson that the music should embody a “spectre of evil” without “any semblance of sentimentality or nostalgia.”

To achieve this, Stetson avoided the use of strings and synthesizers and chose to to replicate traditional horror sounds with non-traditional instruments, particularly the clarinet and his own voice. The idea of “hiding in plain sight” was vital to the instrumentation: when the audience thinks they hear a section of violins or the drone of a synthesizer, they’re likely listening to carefully layered woodwinds and vocalizations.

Abels and Stetson demonstrate unconventional, but vastly different takes on the horror film standard of heightening fear through music. Abels takes inspiration from blues, bluegrass, and African and African-American musical traditions to intertwine the subtext of the film into the music, while Stetson creates deceptive instrumentation by trading in a full orchestra for clarinets, saxophones, and his own voice – but no matter the approach, the disquieting movies they accompany are better for it.

How Scores to ‘Three Billboards,’ ‘Get Out’ and ‘Murder on the Orient Express’ Tune Up Intensity (Variety)

The Meaning Behind ‘Get Out’s’ Haunting Score  (The Hollywood Reporter)

The Most Terrifying Move of the Year, Hereditary, Has Colin Stetson to Thank (Pitchfork)

The Story Behind the Haunting, Unconventional Music of ‘Hereditary’ (Thrillist)