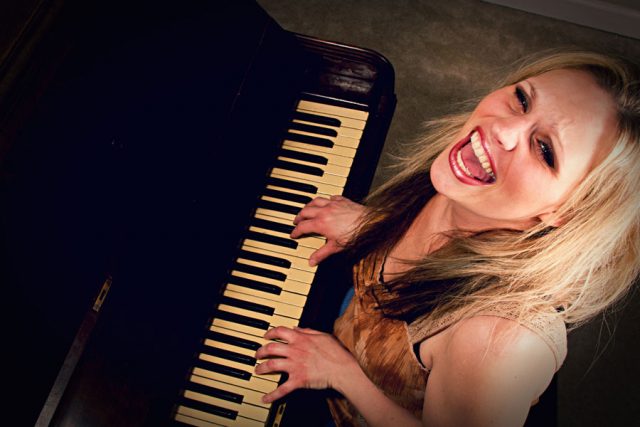 Nightmares often wander into the world we know best. Maybe you’re a student who routinely dreams about taking a test you didn’t study for, a waiter whose nightmares are haunted by the sound of trays falling to the ground, or a motivational speaker who dreams of addressing a huge crowd, only to realize you’re wearing pajamas.

For performing artists, dreams that start off with a routine trip to the concert hall can quickly devolve into a performance gone wrong… very wrong.

Carolina artists and friends of WDAV recall musical nightmares that made them wake up in a cold sweat.

“This musician’s worst nightmare FELT as if it went on all night long!

In the dream, I was in the John Clark Performance Studio at WDAV, which was more like a creepy warehouse than an actual studio. I was there to play solo Bach live on the radio, but things kept going wrong at every turn.

The folks at WDAV put me in a tiny corner surrounded by furniture, so I wasn’t able to move my arms back and forth. They turned off all of the lights, so I wasn’t able to see my music, and of course, I hadn’t memorized the pieces. Then they brought in a brass ensemble and wanted me to play a piece with them. I didn’t have the music, AND the brass group was tuned to A=440, while I was tuned to A=415 (Baroque pitch).

I felt like a terrible, inflexible musician, and I could tell I was really getting on Frank’s nerves!”

“I once dream-journaled for a week or so, keeping a pen and paper on the nightstand to jot down my dreams before I forgot them.

I discovered that almost every night, I would dream that I was before a live audience with the impossible task of playing a song I didn’t know. For example: I was at the piano, accompanying Louis Armstrong at the Bechtler.

He started playing a song that I didn’t know and I struggled to keep up.

Louis was doing his famous schtick, scat singing and hamming it up. He even had his famous white handkerchief. The crowd was loving it! But Louis was tremendously disappointed in my piano playing. As soon as the song soon ended, he turned towards me and his big smile gave way to a long, contemptuous death-stare.

I was so mortified and ashamed, it was literally my worst nightmare!”

“My scary recurrent performer’s dream began like this:  a singer and I were backstage waiting to go on for the performance, when I was handed a raft of Richard Strauss songs (some of the hardest and most beautiful piano music I know), told that this was now the music she would be singing, and we were immediately thrust out on stage.

Shockingly, here I was sight reading horribly in this performance, and wondering how this could be happening.

Perhaps it had something to do with the fact that the week before, my singer daughter’s M.M. degree recital accompanist quit just a week before the recital, and guess who had volunteered to learn the music and accompany?!”

And one real-life nightmare…

“In 9th grade, I was asked to perform at my local town hall in front of the whole school. Of course, back then I used to spend much more time playing my instrument than running the required maintenance and repairs on it that I should…

A trombone has a thumb valve that we use to open up extra tubing for some notes, but on the night of this performance, my valve was on the fritz.

Right before the performance. Not a problem – you can get those notes elsewhere on the slide without using the valve, so the show would go on.

Reflexes, however, are funny things. What I didn’t factor in was the fact that I had only ever practiced this beautiful piece with those notes on the thumb valve, and in the heat of performance my reflexes did what they had been trained to do. Each time I would play the wrong note (because the valve didn’t work) I’d hear it, remember, and scramble to the other place I could get the right note. This happened maybe 50 times in the space of 5 minutes. I was devastated, and this potentially beautiful piece was… well… not beautiful. I think for the last phrase I just stopped playing – I just looked at the audience and sadly shrugged. I’m sure it was the highlight.”