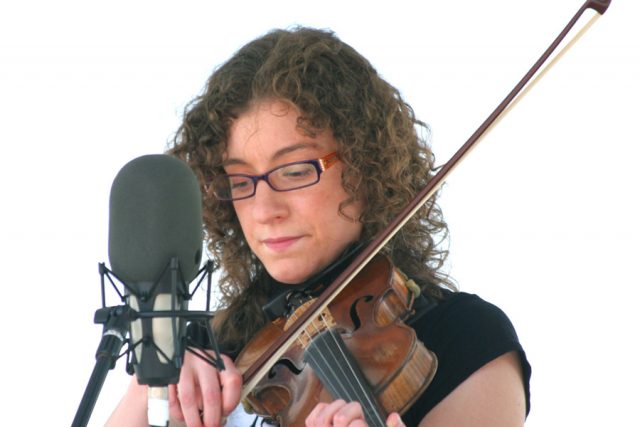 FUN FACT: Rayna has made several videos of fiddle tunes played at different speeds available at her website as a resource for beginners and “fiddle geeks.”

Rayna called on inspiration from her upbringing for her 2012 album Old Light: Songs from My Childhood & Other Gone Worlds, a mixture of original tunes and songs she listened to her parents sing throughout her childhood – but not without hesitation. “My reverence for the music and my complicated relationship with it, being so deeply tied to family and childhood and lots of emotion, made me skittish,” Rayna explained in a Huffington post interview, “Part of my process in recent years has been recognizing that creating a new or different version of a song isn’t disrespectful or dismissive of any other version of that song… My singing a song isn’t me saying ‘My way is best.’ It’s just me saying, ‘I want you to hear this song.’”

Originally trained as a classical violinist, Rayna picked up fiddling in 1994 when she moved to North Carolina to attend Warren Wilson College in Swannanoa. Through participating in countless jam sessions and square dances, Rayna sharpened her fiddle skills – and soon enough, she began to tour the world.

In January of 2000, Rayna joined the old-time string band Freight Hoppers and later became a member of the all-female old-time band Uncle Earl, a group that aims to introduce new audiences to the “beauty and limitless potential” of old-time American music while “inspiring the explorations of the next generation of root musicians.” During her time with Uncle Earl, the group released their first EP, Going to the Western Slope, soon followed by a second EP (Raise a Ruckus) and two full-length albums (She Waits for Night and Waterloo, Tennessee).

Rayna has toured extensively with her Uncle Earl bandmate Abigail Washburn and songwriter Scott Miller, whose paths collided when they were booked as part of the same Mountain Stage show in 2010. Adding to her extensive discography, Rayna and Scott released an EP entitled Codependents in 2012. A frequent collaborator, Rayna has worked with a host of musicians from different backgrounds throughout her career, including Jamie Dick, Jon Estes, Robyn Hitchcock, Sara Watkins, and her “favorite musician on the planet” – her father, who is featured on a handful of Old Light tracks.

Through his work with the O’Kanes and Kane Welch Kaplin – and co-founding the independent label Dead Reckoning Records – contemporary Americana musician Kieran Kane has had a massive impact on the genre. In 2017, Kieran joined forces with Rayna after the two met at San Francisco’s Hardly Strictly Bluegrass Festival, and the pair began to release collaborative work soon after: Kieran appeared on and co-produced Rayna’s 2017 album Workin’s Too Hard, followed by two duo albums: The Ledges (2018) and When the Sun Goes Down (2019).

Though Kieran and Rayna’s collaboration is ongoing, their scheduled 2020 tour of Australia was cancelled due to the COVID-19 pandemic. In a newsletter to their followers, Gellert expressed her disappointment, but shared her hope of finding online avenues to connect with the music community.

Outside of her work in ensembles and collaborations, Rayna has regularly performed and recorded as a solo act. In 2003, Gellert was a featured performer at the Smithsonian Folklife Festival, an annual exposition of “living cultural heritage” on the National Mall in DC, and has been a finalist several times at the Appalachian String Band Music Festival in Clifftop, West Virginia.

Though her work is inspired by the music of decades and centuries before her time, Rayna’s music never fails to strike a clean balance between tradition and revolution. Until 2012, Rayna’s singing experience was mostly limited to backup harmonies – but since the release of her Old Light album, which prominently features her singing and songwriting prowess, Rayna’s voice has been a signature component of her work. Her second solo album, Workin’s Too Hard (2017), continues the tradition she solidified in her first solo album – masterfully mixing the old and new – and paves the way forward for American folk music.