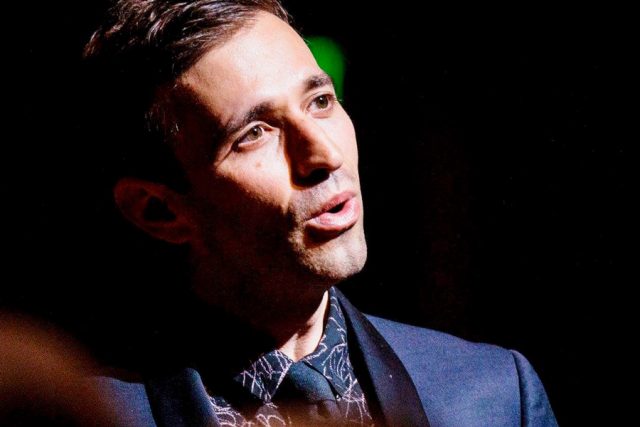 Hailed as “vocally brilliant and dramatically fearless,” countertenor Anthony Roth Costanzo is a consummate artist among the greatest talents of his generation. Growing up in Durham, North Carolina, Anthony’s musical path began at the piano. He struggled to read sheet music as a young student, leading his teacher to try a unique approach: rather than sight reading on the piano, Anthony was instructed to sing from the music instead. The exercise worked – and a passion for singing was born.

Anthony quickly discovered an affinity for musical theatre. By the age of 11, he had appeared in 20 productions in his home state and began to set his sights higher. After convincing his parents that he should give the New York City theatre scene a try, Anthony found rapid success on Broadway and performing in Broadway national tours. He recalls his time in musical theatre in an episode of the video series Living the Classical Life: “It was amazing… I had this breadth of experience which was really illuminating in terms of my understanding of the dramatic arts.”

Anthony’s first brush with opera arrived when he was cast in a production of Benjamin Britten’s The Turn of the Screw, making a lasting impression on music director and conductor Michael Pratt. “He was thoroughly professional, completely prepared, and had excellent musicianship,” Michael later remarked, “It was like working with a pro when I first met him at age 13.” While preparing for the opera, someone pointed out that Anthony had retained a high natural singing voice despite having gone through puberty – the first sign that he might be a countertenor.

In his teens, Anthony’s career flourished on and off the stage; notably, he earned the chance to perform alongside Luciano Pavarotti in the Opera Extravaganza at Philadelphia’s Academy of Music. During a “detour into the world of film,” he also received an Independent Spirit Award nomination for his role in the 1998 film A Soldier’s Daughter Never Cries.

While pursuing a Bachelor’s degree at Princeton University, Anthony embarked on an ambitious senior thesis project: co-writing and starring in the avant-garde performance piece The Double Life of Zefirino, a fictional account of an 18th-century castrato opera singer. The piece – and its creation – became the subject of the documentary Zefirino: The Voice of a Castrato, which was selected for the Cannes Film Festival and won a Director’s Choice Award at the Black Maria International Film Festival in 2007. Anthony later earned a Master’s degree from the Manhattan School of Music, where he received the Hugh Ross Award for singers of exceptional promise.

A standout among his peers, Anthony’s post-grad years are marked by accomplishment after accomplishment. In 2008, Anthony received the top award at both the Opera Index Vocal Competition and the Sullivan Foundation Auditions. The following year was even better: Anthony won a Richard F. Gold Career Grant, took first place at both the Jensen Foundation Competition and National Opera Association Vocal Competition (Artist Division), and became a 2009 Grand Finals Winner of the Metropolitan Opera National Council Auditions. Among other awards, Anthony cinched first place at the international opera competition Operalia in 2012.

As Anthony notes in a 2016 interview with the Los Angeles Times, countertenor roles are largely limited to “two ends of the spectrum: before 1750 and after 1950.” Equally versed in both extremes, Anthony made his Metropolitan Opera debut as Unulfo in Handel’s Rodelinda in 2011 and sang in the world premieres of two major American operas in 2015: Jimmy López’s Bel Canto at the Lyric Opera of Chicago and Jake Heggie’s Great Scott at the Dallas Opera (opposite mezzo-soprano Joyce DiDonato). Anthony and Joyce appear together on the original cast recording of Great Scott, released in 2018.

Now nearly three decades into a life on the professional stage at 38, Anthony has never been satisfied to take the most obvious route. As a performer, he has held engagements with many of the world’s leading opera houses (to name a few, the Metropolitan Opera, Lyric Opera of Chicago, and the English National Opera), but his boundless creativity has led to numerous projects outside an opera singer’s typical comfort zone.

Anthony became the first American opera singer to appear in a Kabuki play, a traditional Japanese drama form, in Kyoto in 2014 after forming a friendship with writer Toyoshige Imai. The play, a new adaptation of the 11th century classic The Tale of Genji, melded the Kabuki and Western opera forms to create something “palpably new” – and all 26 performances sold out.

In 2018, Anthony teamed up with Visionaire to create the multimedia installation Glass Handel to coincide with the release of his studio album ARC, which features the works of Philip Glass and G.F. Handel. A jaw-dropping melding of music, fashion, live painting, dance, and film, the project brought together many of Anthony’s former colleagues to create an interactive experience intended to introduce new audiences to opera. A set of highly original music videos, filmed to sync with Anthony’s singing during the performance, are available to view on YouTube. ARC would later receive a Grammy nomination for Best Classical Solo Vocal Album in 2019.

As curator and producer, Anthony has worked with National Sawdust to create a new production of Handel’s Aci, Galatea e Polifemo and the compilation piece Orphic Moments. “Interdisciplinary collaboration, growing audiences, and creating interesting art, whether I’m producing it, or curating it, or just making introductions among opera companies and directors, are all important to me,” Anthony explains in an interview, “As an opera singer in today’s world, you can’t just sing your roles well; you have to be a creative spirit and a driving force.”

In 2016, Anthony took on his most challenging engagement to date: the title role in a new production of Philip Glass’s Akhnaten. In Anthony’s words, his role in the opera – a physically and vocally demanding spectacle of over three hours – “goes beyond athletic to Olympic.” He premiered the production with the English National Opera and has since performed the role at the Los Angeles Opera and the Metropolitan Opera (opposite mezzo-soprano J’Nai Bridges).

Recently named Musical America’s 2019 Vocalist of the Year, Anthony continuously makes strides as a champion of opera’s place in the present and future. “This is something that can connect to all different kinds of people,” he explained in an interview with NPR. “I feel like the emotional sweep of opera is what we need to give us some perspective on our lives, on this time we’re living in, on all of that. We need that kind of catharsis.” Though any one of Anthony’s accomplishments could be the pinnacle of a life in the arts, the sense emerges that his career is just beginning – and what comes next will surprise, delight, and inspire.

“Anthony Roth Costanzo: A Countertenor For The 21st Century” (NPR)