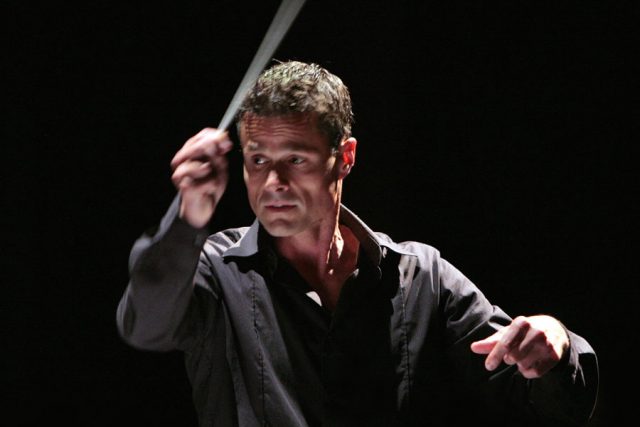 An Early Start – And A Debut Like No Other

David Charles Abell’s path to classical music’s highest ranks accelerated more quickly than most. Born in Jacksonville, North Carolina in 1958, David spent the majority of his childhood in Philadelphia, where his musical education took root as a member of both the school orchestra and a local boys choir. In 1971, David was chosen to be part of the Berkshire Boy Choir, a summer national choir described in the New York Times as “a phenomenon… an assemblage of some of the best boy voices in the country.”

In the same year, the beloved American composer-conductor Leonard Bernstein was preparing for the premiere of his theatrical work Mass, which had been commissioned by first lady Jacqueline Kennedy Onassis for the opening of the John F. Kennedy Center for the Performing Arts – and the Berkshire Boy Choir was selected to perform. David had a chance to meet Bernstein at a recording session after the performance, but it wasn’t the last time their lives would intersect.

David went on to pursue musical training at Yale University, the American Conservatory in Fontainebleau, and the Juilliard School, learning from masters including John Mauceri, Nadia Boulanger, and – you guessed it – Leonard Bernstein. As an undergraduate student at Yale, David reconnected with Bernstein through Mauceri and began to work with him as an editor and protégé. Bernstein was later responsible for David’s extraordinary professional conducting debut: at just 23 years old, David conducted the European premiere of Mass at Berlin’s Deutschlandhalle in a true full circle moment.

David made his American debut in 1983 at a Washington National Opera performance of Britten’s The Turn of the Screw, stepping in for Mauceri with only a few hours’ notice. After a series of high-profile opera engagements throughout the 1980s, David accepted an offer to conduct the 1989 national tour of Claude-Michel Schönberg’s Les Misérables, the beginning of a lifelong reputation as a master conductor of musical theatre. His work on the show impressed Schönberg, and in 1995, David was tapped to lead the televised 10th anniversary concert version of the musical. Fifteen years later, he returned to conduct the 25th anniversary broadcast at London’s O2 Arena.

After officially relocating to London in 1996, David maintained a bustling calendar of opera, musical theatre, and concert appearances, including regular guest conductor slots at the BBC Proms. In fact, the 2010 celebration of Stephen Sondheim’s 80th birthday at the Proms was David’s brainchild: having adored Sondheim’s work since a trip to see A Little Night Music at 16, David successfully argued that the composer’s music belonged in front of the Proms’ “knowledgeable and enthusiastic” audience.

Throughout his career, David has shown a keen interest in preserving Broadway shows with the same dignity granted to the classical “greats,” often partnering with his husband Seann Alderking, a pianist and musicologist. David and Seann notably worked together to produce a clarified version of Bernstein’s West Side Story for the composer after multiple poorly organized iterations created “a mess.”

While preparing to conduct the Broadway musical Kiss Me, Kate at the Glimmerglass Festival in 2008, David began to search for the show’s original manuscripts, hoping to create a full orchestral score – something of a rarity for Broadway classics. “Having conducted a lot of Broadway shows, I knew that the orchestra parts and scores are usually in terrible shape,” David explained in an interview with Opera North, adding that parts are often handwritten and may not match one another as versions are mixed together over the years.

After what felt like an “archaeological dig,” David and Seann uncovered 75-80% of the original orchestrators’ manuscripts on the shelves of the law office that protects the Cole Porter Trusts. Thrilled to discover that the majority of Kiss Me, Kate still existed in its first iteration, David secured support from the Cole Porter Trust to produce what’s known as a critical edition, a comprehensive version of a work intended to be as faithful as possible to the original form. Over the next four years, David and Seann meticulously edited and compiled a complete, error-free version of over 1,000 pages, allowing audiences to hear the show’s original sound for the first time in decades. With David at the podium, Kiss Me, Kate’s new critical edition had its first fully-staged performance at Opera North in 2015.

Described as “a protean talent” possessing “impeccable and inspired” conducting skill, David’s most recent projects include appearances with Opera Philadelphia, the Cincinnati Opera, the Glimmerglass Festival, and the English National Opera, where he conducted a critically acclaimed 2015 production of Sweeney Todd starring Bryn Terfel and Emma Thompson. David has been lauded as an “authoritative interpreter” of the works of Stephen Sondheim, leading the French premieres of Follies, Sweeney Todd, Sunday in the Park with George, and Into the Woods between 2011 and 2014. David was appointed Music Director and Principal Conductor of The Philly POPS in February 2020 and remains in the prime of his career.

“If I hadn’t (conducted Broadway musicals), my career might have been easier, but I don’t regret it. It taught me about storytelling,” David expressed in a 2019 interview with the Cincinnati Opera, noting that conductors who work in musical theatre are often pigeonholed in the genre. “I do think of all music as storytelling, even a Mahler or Beethoven symphony… if you can bring that alive for an audience, you can engage them.”

Interview with David Charles Abell, Conductor of the 2010 Sondheim Prom (The Art of the Torch Singer)

Conductor David Charles Abell Prepares For A Season of Sondheim