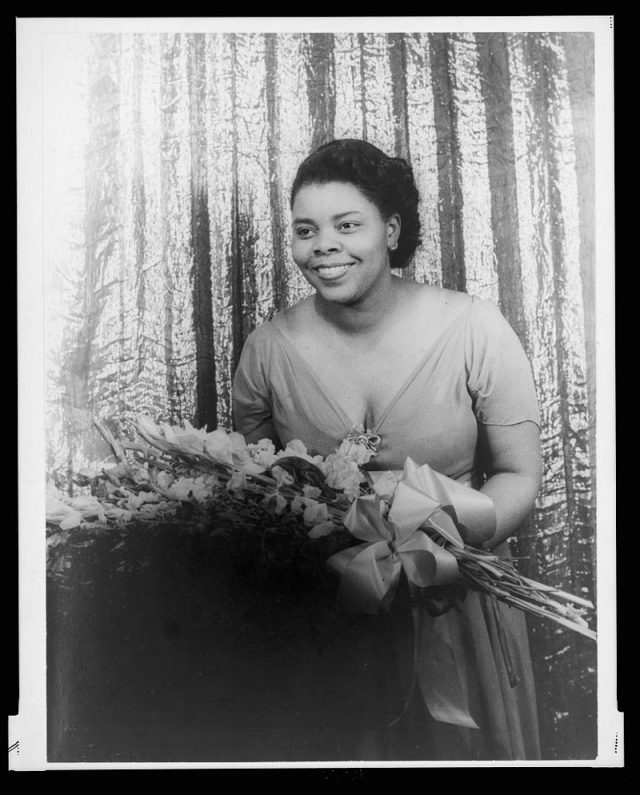 CONTRALTO: The lowest female voice type in classical singing, with a vocal range between mezzo-soprano and tenor.

FUN FACT: While enrolled at the Palmer Memorial Institute, Carol had the opportunity to meet the esteemed contralto Marian Anderson when she visited the school. Marian famously performed a concert from the steps of the Lincoln Memorial to a crowd of 75,000 in 1939 after she was denied the chance to sing to an integrated audience at Washington, D.C.’s Constitution Hall.

First Signs of a Special Talent

From opera’s most famous venues to the Broadway stage, contralto Carol Brice’s remarkable story began here in the Carolinas. At 18 months old, Carol was sent to Sedalia, North Carolina to live with a cousin of her mother, Dr. Charlotte Hawkins Brown. Dr. Brown was the founder and president of the Palmer Memorial Institute, the only finishing school for African-Americans in the country – and the place where Carol’s musical gifts were first nurtured.

Carol performed at some of the nation’s most prestigious venues while still in high school as a member of the Palmer Institute’s Sedalia Singers, including New York City’s Town Hall and the White House. She later earned a Bachelor of Music degree from Talladega College in Alabama and set off for New York City, where she continued her vocal studies as a fellowship recipient at the Juilliard School of Music.

A Career in Motion

It didn’t take long for Carol’s star to rise after her arrival in New York. Her debut in the musical The Hot Mikado at the 1939 New York World’s Fair made a splash with the public, and just two years later, Carol was selected to sing at the third inauguration of President Franklin Delano Roosevelt. In 1943, Carol became the first African-American person to win the prestigious Naumberg Award.

Carol soon began to tour the country extensively as a recitalist and concert soloist, including regular engagements with the Boston Symphony Orchestra. In the 1950s, her career expanded to the international stage with a summer tour to South and Central America and a 1954 appearance with the Berlin Philharmonic Symphony Orchestra.

Fun Fact: Carol often collaborated with her brothers Eugene, a fellow Juilliard graduate, and Jonathan, her preferred accompanist and an accomplished singer. The siblings eventually formed the Brice Trio and performed together at New York City’s Town Hall in 1958.

It’s never too late to discover something new about yourself – and after her critically-acclaimed performance in the 1958 New York City Opera production of Marc Blitzstein’s theatrical work Regina, Carol transitioned seamlessly into the world of musical theatre at the age of 40. Carol’s Broadway roles include Kakou in Howard Arlen’s Saratoga (a role she originated), Maude in Finian’s Rainbow, Queenie in Showboat, and Maria in Porgy and Bess.

Carol’s operatic career progressed throughout the 1950s and 60s, particularly through lengthy engagements with the New York City Opera and the Vienna Volksoper. In Vienna, she met the South Carolina-born baritone Thomas Carey, and the pair soon married and began a life together.

Fun Fact: In 1976, Carol starred as Maria in a Houston Grand Opera production of Porgy and Bess. The cast won a 1977 GRAMMY Award for Best Opera Recording, and the entire production transferred to Broadway, where it won the 1977 Tony Award for Most Innovative Production of a Revival.

When Thomas accepted a teaching position at the University of Oklahoma in 1969, Carol joined him and became a member of the University faculty in 1974. In the following year, the couple founded the Church Circuit Opera Company, now known as the Cimarron Opera. The opera company was created to “serve as a platform for Black artists during a time when (the) town of Norman, Oklahoma was not yet racially integrated” and now provides aspiring artists of all backgrounds with training and performance opportunities.

Revered for her warm, resonant voice and musical sensitivity, Carol was a frequent recipient of awards and recognition throughout her career. She was awarded an honorary doctorate from Talladega University in 1955, and in 1963, she received the National Association of Negro Musicians’ (NANM) Emancipation Proclamation Award. In 2012, North Carolina branch of NANM adopted the name “Carol Brice Music Association” to honor her role in “break(ing) down the racial barriers hindering Black classical artists.” Carol passed away in 1985 at the age of 66, leaving behind a legacy of excellence as a performer, teacher, and leader.