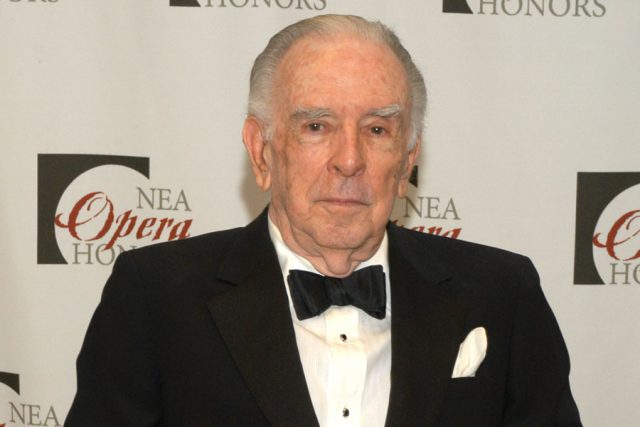 Fun Fact: Carlisle completed his first opera, Slow Dusk, as a project toward his Master’s degree in Piano with a minor in Composition.

Little did he know, but a South Carolina boy who begged his mother for piano lessons at the age of three (only to quit when he realized that there was “work involved”) would one day be called the “Father of American Opera.” Luckily, the admired opera composer and librettist Carlisle Floyd regained his interest in the piano at 10 – and this time, he excelled.

In 1943, Carlisle earned a scholarship to attend Converse College in Spartanburg, SC, where he studied piano under Ernst Bacon, a respected composer, pianist, and conductor. When Ernst took a position at Syracuse University in New York, Carlisle followed him and received a Bachelor of Music from Syracuse at the age of 20. Shortly after his graduation, Carlisle began his teaching career at Florida State University and remained on the faculty for thirty years, eventually becoming Professor of Composition.

Carlisle was exposed to the ever-evolving world of American classical music through Ernst, who championed the development of American musical independence. Not only did the American “camp” of classical composition resonate with Carlisle stylistically, it also empowered him to explore composition through his own unique lens. Inspired by lessons his creative writing teacher imparted at Converse (“write what you know” and “mine your experiences of the locations and the people that you have come across”), Carlisle would go on to use his rural upbringing and experience with the working class as fodder for his operas.

Although his preliminary training was in piano, Carlisle explains in an interview with NEA Opera Honors that there was never truly a question for him when it came to what he would compose. As a graduate student with a burgeoning interest in composition, the combination of dramatic and musical elements drew him to theatrical works, and his use of text for nearly every project revealed opera to be the “natural arena to spend (his) creative life.”

Although his first two operas, Slow Dusk and The Fugitives, were not particularly successful, these explorations paved the way to his most beloved and well-known work: Susannah. Carlisle sees his musical journey as one of growth and development; in his own words, The Fugitives “bombed royally,” and “Susannah would not have been possible” had he not had this experience with failure.

Susannah: Based on the Apocryphal tale of Susannah and the Elders, Susannah tells the story of a spirited young woman of humble origins who is faced with unjust hostility from her church community.

While searching forsingers for Susannah, Carlisle was surprised that Phyllis Curtin, already an established New York City Opera star, was so willing to listen to the work of a relatively unknown composer. After a brief phone meeting, Carlisle visited her house to read through the two main arias with her. Phyllis, who would be cast as the original Susannah, fell in love with the piece immediately: born and raised in West Virginia, Phyllis felt “sympathetic” to the character and related to her in ways she had never experienced with an operatic role. Phyllis reprised her performance in the New York City Opera production and went on to sing the title role many times, including the 1958 World’s Fair production in Brussels.

In an interview, Carlisle explained his desire to “redress the balance (of opera) with drama and music,” creating an art form that anyone can enjoy – and by all accounts, Susannah was “very easily accepted” by audiences in its earliest days. Not only is the story widely accessible, but its musical influences resonate with the American experience, particularly in the rural South and Appalachia. In Phyllis’ words, Susannah “exemplifies what real opera is… a remarkable coming together of people and music.”

Following the success of Susannah, Carlisle went on to compose numerous other operas such as Wuthering Heights (1958) and Of Mice and Men (1970). After a hiatus of almost twenty years, Carlisle completed the opera Cold Sassy Tree (2000), based on the novel by Olive Ann Burns. As his only venture into comedy, Cold Sassy Tree was a completely new experience for Carlisle; he notes that he once told his wife he felt like he’d “never written an opera before” while piecing the work together. Carlisle’s most recent opera, Prince of Players, was commissioned by the Houston Grand Opera and premiered in 2016.

Credited with creating “a distinctly American idiom for opera”, Carlisle has often been recognized for his vital contributions to the field. A recipient of the coveted Guggenheim Fellowship in 1956, he would go on to receive numerous awards for his work in the arts.

“I think anything that is expressed directly and as honestly as possible will last.”

Some of the most notable include:

1957: Citation of Merit from the National Association of American Conductors and Composers

2004: National Medal of Arts from the White House

2010: Anton Coppola Excellence in the Arts Award from Opera Tampa

2011: Induction into the South Carolina Hall of Fame

2012: Phi Mu Alpha Sinfonia Man of Music (the highest honor for a member of the American music fraternity)

2015: Inducted into the Florida Artist Hall of Fame