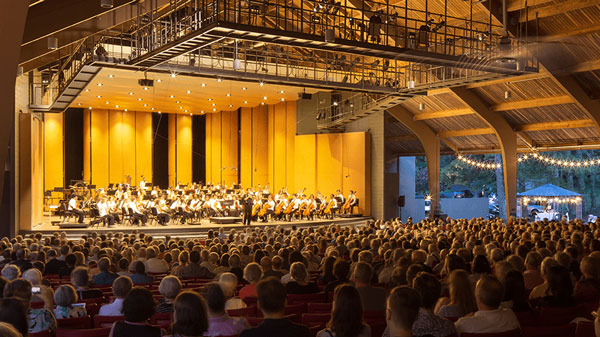 As the pandemic drags on in the Carolinas, the arts continue to feel the repercussions. Particularly hard hit are the regional summer music festivals that have been a haven of culture for both locals and vacationing visitors for many years. With customary creativity, these festivals have pivoted to present virtual programs in the spirit of the in person festivals.

Given how long WDAV has benefited from close partnerships with An Appalachian Summer Festival in Boone, the Eastern Music Festival in Greensboro, and the Brevard Music Center and Summer Festival in the western Blue Ridge Mountains, we feel an obligation to keep their presence front and center with our listeners.

Every Wednesday at 10 a.m. during the month of July, we feature a different classical music performance from An Appalachian Summer Festival, many of them featuring the acclaimed Broyhill Chamber Ensemble.

The Eastern Music Festival, helmed for decades now by the distinguished American conductor Gerard Schwarz, enjoys a similar showcase on WDAV Tuesdays and Saturdays at 10 a.m. beginning July 14th through the 28th. We’ll share concert highlights from the festival that have previously aired on our weekly concert program, Carolina Live.

Our strongest ties are with the Brevard Music Center, which shares Davidson College as a “parent” in common with WDAV. The college is where music professor James Christian Pfohl first hosted the summer music camp that eventually moved to Brevard in the 1940s. It has grown to be one of the premier music centers and festivals in the nation. For more than a decade, WDAV has produced a concert series drawn from festival performances. A retrospective of the best of Open Air Brevard is available on WDAV Saturday evenings at 6 through August 15th, as well as on demand at our website.

Information about the online offerings of all these festivals is available at the WDAV Events Calendar.