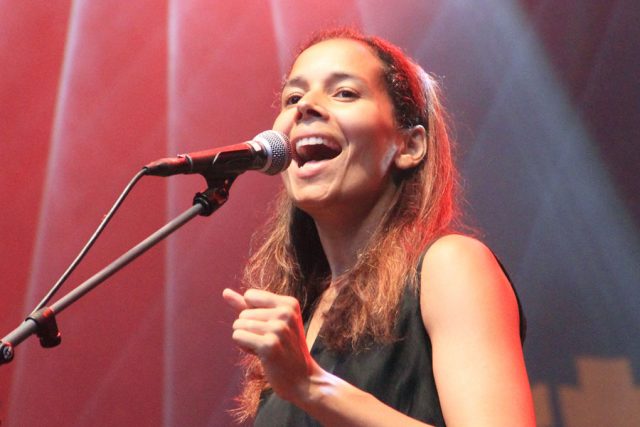 FUN FACT: During her graduate studies at the University of North Carolina-Greensboro, Rhiannon took on the title role in Carlisle Floyd’s opera Susannah. She also convinced the director to let her choreograph the square dance sequence – thanks to her extensive background in square dance teaching and calling.

Simply put, North Carolina-raised musician Rhiannon Giddens is one of a kind. In an interview with Our State magazine, Rhiannon’s mother recalled the earliest hints of her remarkable ability: “She was always singing… she had a wonderful voice really early on.” Though she didn’t yet dream of a career in music, her voice came in handy as she pursued childhood hobbies, singing in the Greensboro Youth Chorus and harmonizing with her father and sister.

It wasn’t until an audition for a spot at the Governor’s School of North Carolina at 17 – which left a panel of choral teachers in awe – that Rhiannon realized how rare her talent truly was. She went on to earn a Bachelor’s degree in Voice from the Oberlin Conservatory of Music and pursued graduate studies in Opera at the University of North Carolina-Greensboro.

Rhiannon’s first brush with a career in folk music came by accident while studying at Oberlin. Expecting a country dance à la Jane Austen, she attended a contra dancing event after misreading a flyer – and immediately fell in love. Burned out on opera and frustrated with her voice after a grueling five years at Oberlin, Rhiannon returned to Greensboro, where she picked up contra dancing again and began to travel the state calling dances.

Soon, Rhiannon was well on her way to becoming a multi-instrumentalist. “I loved the banjo sounds I’d hear at the dances, so I learned to play,” Rhiannon recalled in an interview with Oberlin Alumni Magazine. “Got a second job to buy a banjo, singing opera arias at a Macaroni Grill. I quit as soon as I bought the banjo.” While attending the 2005 Black Banjo Then & Now Gathering in Boone, NC, Rhiannon hit it off with fellow musicians Don Flemons and Justin Robinson. Soon after, the new trio formed the first lineup of the Carolina Chocolate Drops.

“There’s something very special and warm and exquisite about her voice. It has its own beauty, no matter the style… so it came as no surprise when she went off in this other direction and was equally magnificent at it.”

Through meticulous research and practice, the Chocolate Drops set out to prove that the “old-time, fiddle and banjo-based music” they loved “could be a living, breathing, ever-evolving sound” and shine a spotlight on African-Americans’ crucial role in developing America’s popular music. In an interview with NPR, Rhiannon explained, “It seems that two things get left out of the history books. One, that there was string band music in the Piedmont (region of the Carolinas), period… (and that) Black folk was such a huge part of string tradition.” Described as “the most electrifying acoustic act around,” the Chocolate Drops received the 2011 Best Traditional Folk Album GRAMMY Award for Genuine Negro Jig.

Though Rhiannon is still an active member of the Carolina Chocolate Drops, her solo career has grown by leaps and bounds over the last decade. Little known outside of the folk circuit, Rhiannon was invited to participate in the star-studded 2013 “Another Day, Another Time” concert in New York City – and received the only standing ovation of the night. Shortly after, she contributed to two projects that earned significant attention: the 2013 LP We Are Not For Sale: Songs of Protest (a compilation of songs from North Carolina activist musicians) and the 2014 Bob Dylan collective Lost on the River: The New Basement Tapes.

Rhiannon’s solo debut album, Tomorrow is My Turn, was released in 2015 to universal acclaim; one reviewer correctly identified it as “an album that heralds the arrival of a major American artist.” What followed was nothing short of a banner year: in 2016, Rhiannon was selected as the Folk Singer of the Year at the BBC Radio 2 Folk awards (the first American to achieve the distinction), received the Steve Martin Prize for Excellence in Banjo and Bluegrass (the first woman and person of color to be honored), and was inducted into the North Carolina Hall of Fame with the Carolina Chocolate Drops. Rhiannon has since released two studio albums, Freedom Highway (2017) and There is No Other (2019), and numerous singles and EPs.

In 2016, a missed opportunity gave way to an unexpected new path. Scheduled to replace Audra McDonald in the Broadway’s Shuffle Along, she poured herself into months of training and dance lessons, only to have the production close before she could make her debut. A few days later, Rhiannon was asked to join the cast of the TV show Nashville, an unforeseen chance that she asserts “saved (her) life.” Since 2018, Rhiannon has hosted the WQXR podcast Aria Code, which “pulls back the curtain on some of the most famous arias in opera history.”

In addition to the Chocolate Drops’ 2011 GRAMMY Award, Rhiannon is also a two-time recipient of the International Folk Music Award for Album of the Year, Blues Artist of the Year at the 2017 Living Blues Awards, and the 2019 Americana Music Honors & Awards Legacy of Americana Award. In 2017, she was named a MacArthur “Genius” Fellow, an extraordinary honor for exceptional individuals in any field.

Though her career isn’t typical of an opera student, Rhiannon still makes time to explore her classical background. “I play banjo for a living and sing opera for fun,” she once remarked, “It’s a weird world. My banjo pays for my health insurance. Who knew?” Most recently, Rhiannon was engaged to perform the title role in a Greensboro Opera production of Gershwin’s Porgy and Bess, now postponed to January 2022. In another stunning turn, Rhiannon was commissioned to premiere an original opera, Omar, at the Spoleto Festival in Charleston, SC. The opera, which will premiere as part of the 2021 season, is based on the autobiography of Omar Ibn Said, a Muslim-African man who was brought to Charleston and enslaved in 1807.

For anyone wondering if there’s anything Rhiannon can’t do – the answer is “not yet.”

Rhiannon Giddens and What Folk Music Means (The New Yorker)