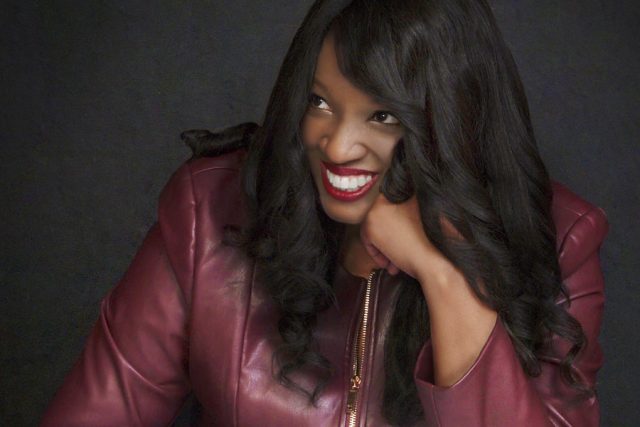 FUN FACT: Nkeiru premiered and conducted her piece “The Creation” in 1999 while earning her Ph.D. at Rutgers University – with actor Danny Glover as narrator.

From an early age, Nkeiru Okoye’s mind was buzzing with music. She couldn’t help but hear melodies and rhythms where others did not, often making up music to go with words from the storybooks her mother read to her. In a 2006 interview with the Baltimore Sun, Nkeiru speculated, “If I had been born into a musical family they might have recognized that I was a composer… but I wasn’t.” Nkeiru’s musical gifts became unmistakable when she entered a national composition competition sponsored by the NAACP at age 13 and took first prize. She would later earn a Bachelor of Music degree in Composition from the Oberlin Conservatory of Music and a Ph.D. in Music Theory and Composition from Rutgers University.

During her studies, Nkeiru made her presence known in the composition field as accolades began to pour in. She received the prestigious ASCAP Grant for Young Composers in 1995, followed by a 1997 UNISYS African American Composer Residency with the Detroit Symphony Orchestra. In 1999, she received the Yvar Mikhashoff Trust for New Music Grant.

Described as “genre-bending” with a “dizzying range of influences,” Nkeiru’s works showcase expertise in a wide variety of genres and techniques. She is particularly at home in the opera/theatre and symphonic mediums. “Voices Shouting Out,” “a wistful, percussive wonder composed by Nkeiru Okoye in the aftermath of September 11, 2001,” was commissioned by the Virginia Symphony Orchestra in 2002 and remains her best known work. The narrated orchestral piece “The Journey of Phillis Wheatly,” a collaborative effort between Nkeiru and writer Carolivia Herron, followed in 2005.

In 2014, American Opera Projects premiered Nkeiru’s two-act opera “HARRIET TUBMAN: When I Crossed That Line to Freedom ,” hailed as “a great American opera” with “irresistible, invigorating, and vivid” music. The seminal theatrical work traces the life of the legendary Underground Railroad conductor, beginning as a child born into slavery with extraordinary strength of spirit. The audience experiences “an intriguing peek into (Tubman’s) life, seeing her hardworking and compassionate parents, the sister she fiercely loves, and John Tubman, the man she married but who gave her little more than the surname which became one of the most famous in the annals of abolitionism.” Abolitionists Rev. Samuel Green  and William Still, both free African Americans, are part of the story as well. The opera includes Nkeiru’s 2006 song cycle “Songs of Harriet Tubman,” which has become “established repertoire for African American sopranos,” in its entirety.

Nkeiru’s most recent works include “We’ve Got Our Eye on You” (2016), “Invitation to a Die-In” (2017), and “Black Bottom” (2020), commissioned by the Detroit Symphony in celebration of the 100th anniversary of Symphony Hall and Classical Roots. It tells the story of residents in the Detroit neighborhoods of Black Bottom and Paradise Valley, which were destroyed in the mid-1950s.

Leading up to the 250th anniversary of the founding of Charlotte, NC in 2018, the Charlotte Symphony Orchestra began searching for a composer to capture the essence of the city in a commissioned piece. Then-president and CEO Mary Deissler “wanted (to select) an outsider who’d come in without preconceptions” – and Nkeiru, a New Yorker with a track record of layered, deeply meaningful work, fit the bill.

The commission came with one special request: the music was to be inspired by a residency in the city, meaning that Nkeiru could not begin writing or visualizing the piece until she had experienced it firsthand. In June of 2018, Nkeiru packed a cultural and historical “crash course” into just five days, interviewing cultural leaders, meeting with orchestra members, sampling the city’s food, and taking in local exhibitions.

The result was “Charlotte Mecklenburg” – a “12-minute tapestry” of richly intertwined influences, including Charlotte’s cotton mills, the city’s racial and economic unrest, and a version of the song “Alma Llanera” in honor of the area’s Latinx community. Inspired by a conversation with music producer Dae-Lee, Nkeiru incorporated percussive phrases that reflect the words “Not my Charlotte” and “Keith Lamont Scott,” a local man killed in a police shooting in 2016.

The Charlotte Symphony debuted “Charlotte Mecklenburg” on September 21, 2018 at the symphony’s annual gala concert. The audience included students from Project Harmony, the CSO’s after-school intensive instruction program for underserved Charlotte area children. “Her existing in this space as a Black female composer is meaningful,” Dae-Lee remarked, “Kids can look at her onstage and say, ‘Oh my goodness, I want to aspire to be there!’ That really opens up your perspective.”

Among her numerous achievements, Nkeiru has received commissions, awards, and honors from the NEA, Opera America, American Opera Projects, Meet The Composer, John Duffy Composer Institute, Composer’s Collaborative, Inc., and the Walt Whitman Project and is the recipient of three grants for female composers from the Virginia B. Toulmin Foundation. She is a current board member of Composers Now and has been profiled in several academic texts, including Routledge’s “African American Music: An Introduction.”

“My music doesn’t easily fit into a single category, though I incorporate many musical influences in a way that creates a sound that is uniquely mine. I think a lot of people are surprised to hear connections between the gospel aria and the jazz aria in Harriet Tubman. Similarly, there’s a pop song in the middle of Voices Shouting Out, along with some funk and a tone row – and it’s my most performed orchestral piece,” Nkeiru writes of her composition style on her website.

“Over the years, I’ve found myself using techniques that seemed ‘avant garde’ to me when first receiving training in composition. At the time, I could not imagine putting those elements into practice. Now, I use them in ways that work for me. It’s surprising to see how well Schoenberg and funk can sit side by side at the symphony.”

“Is this how it was with Mozart?” (The Baltimore Sun)

The world of women in classical music (Anne Gray, 2007)

“The Flight of a New Festival” (Charleston Today)