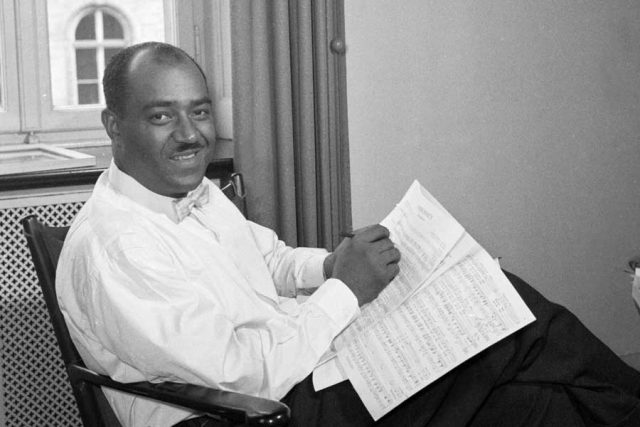 Born in King’s Creek, South Carolina in 1915, bass-baritone Lawrence Winters would go on to join the first wave of Black opera singers to reach international success. After pursuing music privately in Salisbury, North Carolina, Lawrence came into his own while studying under baritone Todd Duncan at Howard University, where he earned a Bachelor of Music degree in 1941.

One of Lawrence’s first large-scale performances, the 1941 concert premiere of the opera Ouanga in New York City, garnered praise and astonishment among critics. Hailing Lawrence as “a true musician” with a “magnificent high baritone,” one reviewer remarked, “(the cast members) are all good; but just watch that young (Winters) fellow go places” – and go places, he did.

At the end of World War II (during which he served in the U.S. Armed Forces as a musical director), Lawrence relocated to New York City full time, where he would build a lasting legacy over the next decade.

A Career in Bloom

Lawrence’s first three years in New York City brought debut after debut, solidifying his status as a rising star in the opera scene. Broadway came first: shortly after Lawrence arrived, he was cast in the 1946 musical revue Call Me Mister. His debut as a recitalist came the following year, and in 1948, Lawrence made his first New York City Opera appearance as Amonasro in Verdi’s Aida – the beginning of a lengthy relationship with one of the time period’s most prestigious opera companies.

Following his debut, Lawrence quickly gained traction at the New York City Opera as a frequent lead baritone, perhaps most notably the title role in a 1951 production of Verdi’s Rigoletto (making history as the first Black artist to perform the role). Lawrence’s career at the NYCO led him to perform many of the most famous baritone roles with the company over the next 7 years, including Timur in Puccini’s Turandot, Count Almaviva in Mozart’s The Marriage of Figaro, and Joe in the musical Show Boat.

When he wasn’t preparing for the next NYCO production, Lawrence maintained a packed schedule as a concert artist and enjoyed regular engagements with European opera companies. International tours, a two-season stint with the Royal Swedish Opera, regular roles with the Hamburg State Opera, and appearances on German television catalyzed his growing international popularity throughout the 1950s. In 1951, Lawrence joined famed soprano Camilla Williams to record the title roles of Gershwin’s Porgy & Bess, the most complete existing recording of the work at the time.

After leaving the NYCO in 1955, Lawrence’s career shifted primarily to the opera houses of Germany. He became principal baritone of the Deutsche Oper Berlin in 1957, then the Hamburg State Opera in 1961, where he remained until his untimely death.

“He colors a phrase with subjective intensity. It’s just as if there were an electric current inside the voice box animating the miniature drama it’s putting across. Current may be plentiful when it’s used to run the refrigerator or a vacuum cleaner, but the kind of electricity Mr. Winters generates is a pretty rare commodity.”

In his last years, Lawrence’s success and popularity remained steady. Lawrence reprised his role in Porgy & Bess for a final performance with the New York City Opera in 1960. In 1961, he received a Tony Award nomination for his role in Ketti Frings’s play The Long Dream – his last appearance on Broadway and one of his few non-singing roles. After a long battle with cancer, Lawrence died at the age of 49 while living in Hamburg with his wife and two sons.

Described as possessing “a voice of exceptional natural beauty and resonance,” Lawrence’s career represents a crucial moment in history – though he was part of the first generation to break through the art form’s barriers, the effort to end racial discrimination in the opera sphere (and the systematic exclusion of Black artists) persists today.

“One of the great singers of our time, most certainly not for a long time have we heard such a moving voice. A timbre of pure silk, sumptuous, deep, brilliant without hardness, as mellow in softness as rich in brightness, a tessitura of over two octaves… And he is an artist.”