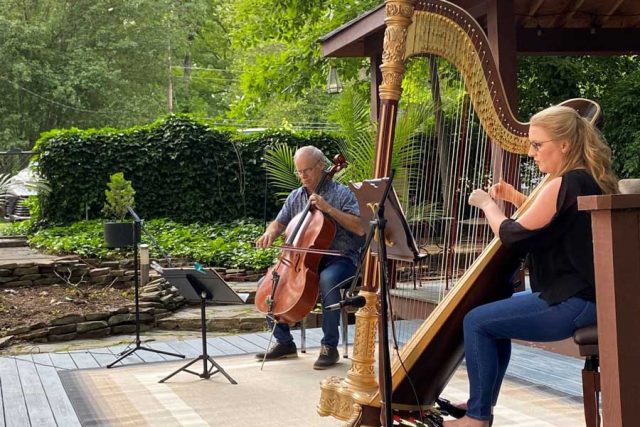 June 16, 2020WDAV BlogNews & Features, UncategorizedLawrence ToppmanComments Off on A pitcher of cool water in a musical desert

The Internet has been crammed for three months with well-intentioned, often makeshift performances designed to relieve the cultural drought. Now the Charlotte Symphony Orchestra has found a satisfying way to bridge the gap between the virtual world and the real one: Its six-concert Al Fresco series kicks off with principal cellist Alan Black and principal harpist Andrea Mumm.

They play on the stage Black erected behind his Woodberry Forest home, a locale so inviting I felt like tracking it down and hiding in the bushes for the next taping. (Suitably masked, of course.) He built it to carry on the 400-year tradition of intimate musical gatherings for small audiences at private homes. But the debut concert had no audience beyond a video crew.

The format, roughly 40 minutes of music and conversation, flows easily. The first program, dedicated to the healing of a nation battered by COVID-19 and racial unrest, consisted of brief, uniformly soothing pieces. Only the last of Ralph Vaughan Williams’ “Six Studies in English Folk Song” briefly moved along faster than an andante tempo. Arvo Pärt’s mesmerizing “Spiegel im Spiegel,” the most serene music I know, seemed especially apt in this context.

Three things will make these concerts more satisfying than most of what I’ve found online. First, the consistently high level of artistry. Second, the naturalness of the performances: Musicians play and converse as they would in a concert hall, set farther apart for social distancing but not in a way that seems odd or affects acoustics.

Future videos range from duos to a quintet and encompass a more adventurous range of composers — Ernő von Dohnányi, Rebecca Clarke, Ignaz Pleyel – alongside Haydn, Mozart and Shostakovich. CSO cellist Jeremy Lamb will perform in works he wrote and adapted.

We’re not to meant to take these as a substitute for in-person performances, which are scheduled to resume August 7 with an all-Beethoven concert at Queens University. But as a stopgap until we can hear the CSO live again, they’re a joy.