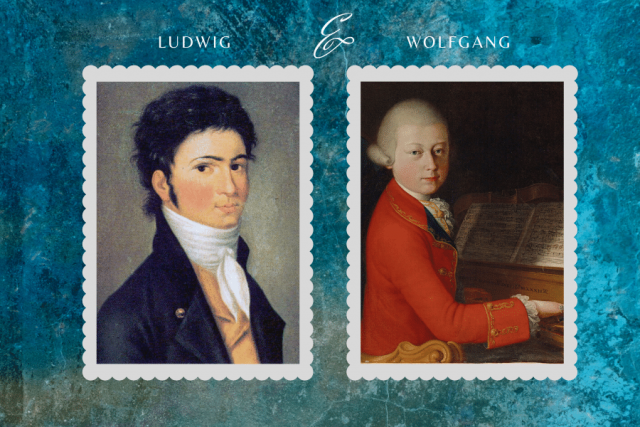 May 20, 2020WDAV BlogNews & Features, UncategorizedLawrence ToppmanComments Off on Ludwig and Wolfgang

For nearly half his life, Beethoven had to hear comparisons between himself and Wolfgang Mozart. Some came from well-wishers, but one warped his personality forever.

Supporters in his birthplace of Bonn urged him to go to Vienna to study with Mozart, but the older man died the year before Beethoven arrived in 1792. As he departed, Count Waldstein (dedicatee of Beethoven’s Piano Sonata No. 21) told him, “You will receive the spirit of Mozart from the hands of Haydn.”

Beethoven made Mozart’s Concerto No. 25 his calling card as a piano soloist. He copied Mozart’s style in early violin sonatas, used it as a jumping-off point in the first two symphonies and rebelled against it in string quartets. Sometimes Mozart simply daunted him: The idea of following the 18th century’s greatest composer of comic operas kept Beethoven from finishing one.

The saddest link between them lay in manipulative, sometimes tyrannical fathers. Leopold Mozart trotted his prodigy around Europe, gathering fame and money at royal courts, and ever after tried to keep his son dependent on him emotionally and supporting him (at least in part) financially.

Johann van Beethoven, a musician and teacher in Bonn, took Leopold as a role model while raising his first surviving son. (Another Ludwig lived for four days in 1769, the year before the composer’s birth.) But where Leopold used psychology to try to control Wolfgang, Johann used the rod.

He put his son on display as a prodigy, lying about the boy’s age to exaggerate his prowess. He forced Ludwig to practice, beating him when he would not and once locking him in a cellar for abandoning the piano bench. Meanwhile, Johann drank profusely, especially after Ludwig’s mother died when the boy was 16.

After that, the family depended more and more on the gifted young pianist and organist to support them. Finally, 18-year-old Ludwig obtained a court order requiring that half of Johann’s pay be turned over to him to maintain himself and two younger brothers. Johann died months after Ludwig moved to Vienna at 21.