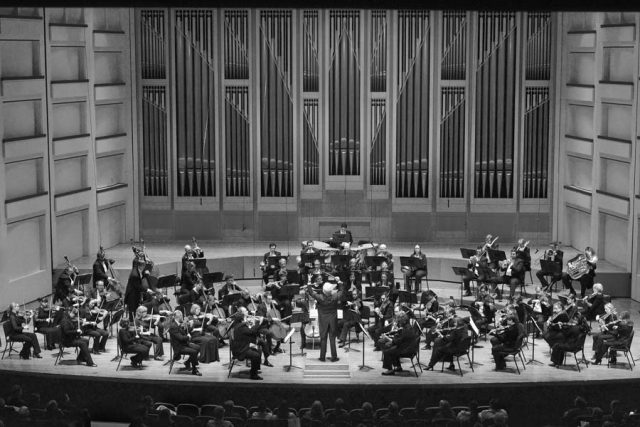 Charlotte Symphony Orchestra musicians have come together (separately, while sequestered) to perform the final movement of his Sixth Symphony. Instead of sitting among each other swapping germs, 29 soloists and a duo recorded their parts separately at the same time on the same day.

You’ll find the fascinating results in “A Symphony A Part” on the CSO website. The musicians played their own parts in the fifth movement – the one depicting rejoicing after the storm – wherever they happened to be. Most tried to get outside, befitting a symphony called the Pastoral, and music sometimes mingles interestingly with ambient noise.

We’re so used to hearing Beethoven’s joyful sounds together that it was a shock to see how they break down. A clarinet tootles lonely notes, then falls silent. A trombone waits two minutes to enter, plays a gentle pattern, then repeats that pattern minutes later. A familiar violin melody skips by, then turns suddenly to chirping birdsong. (The chronically ill composer thought walks in fresh air brought good health, and they always cheered him.)

The musicians’ statement on the website says the project “is meant to show our gratitude for music, one another, the Charlotte Symphony, and the communities to which we belong. As we shelter in place, we remain present. We are tuning into Beethoven’s symphony, the sounds of our respective neighborhoods, and each other.”

We’re reminded that musicians remain as frustrated by their inability to congregate as much as any of us, and of how much we miss by not hearing them perform. (I immediately put on my favorite Sixth, Bruno Walter conducting the Columbia Symphony.) And it shows, if we needed reminding, how much a glorious whole depends on the sum of small parts.

“A Symphony A Part” also serves as a metaphor for our times. We’ll beat COVID-19 through cooperation, playing small roles in the big human orchestra, not by insisting we be heard above everybody else in obtrusive, self-indulgent solos. Respect for other people has never mattered more in America since the Civil Rights Era. If we don’t stay committed to it, there may not be much rejoicing after this pandemic storm.