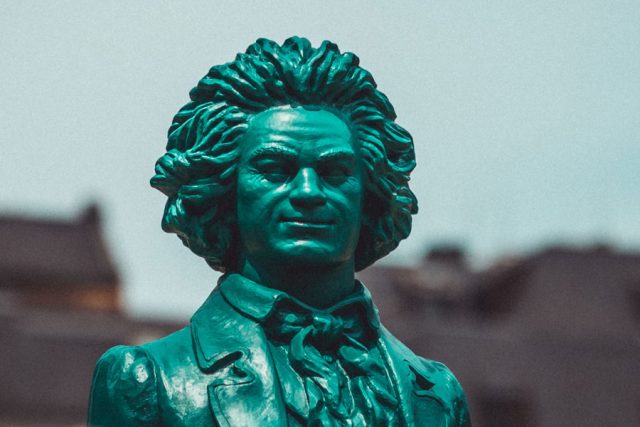 I have studied 46 images online of Beethoven, ranging from his teenage years to his death mask. Every painting, sculpture and drawing has one thing in common: He’s never smiling.

It’s as if showing him with a cheerful expression would be a sacrilege against music. That recalls the furor around Fred Berger’s illustration of a laughing Jesus, which accompanied a commentary by theologian Harvey Cox in 1969: The Messiah hadn’t come to Earth to have a good time! (The fuss arose partly because the piece ran at Christmas in Playboy, which of course I bought for the articles.)

Beethoven seems to be treated the same way: We must furrow our brows alongside his to pay homage to his somber genius. We’ll grant him a celestial benevolence in the finale of the Ninth Symphony, where he contemplates the brotherhood of humanity. But no laughing!

Yet nobody can be completely human without a sense of humor, and Beethoven had one. He’s merry over and over, from the finale of the “Pastoral” Symphony (where peasants rejoice at surviving a thunderstorm) to the sprightly third movements of the “Emperor” Concerto and Violin Concerto. In the last movement of his Symphony No. 1, after a moment of misleading gravity, the violins burst forth with a grin.

He’s clearly smiling in the earliest third of “Fidelio.” A suitor pines comically for a jailer’s daughter; she yearns for her father’s new employee, who’s a married woman in drag. The opera quickly turns serious, but we’ve had a chuckle first.

He didn’t always choose texts for the English, Welsh, Scottish and Irish songs he composed by the dozens. But when they’re silly, mildly bawdy or flirtatious, his tunes faithfully establish those moods without irony or dark shadings.

Even his orchestral music contains moments of rude wit and swagger. I had a music professor who considered the opening of the fourth movement of Symphony No. 2, a cheeky flutter of wind and strings, the equivalent of a raspberry — Beethoven blowing a rude noise at his prosperous audience.

Beethoven often enjoyed Mozart’s comic operas and told Rossini in 1822 he had read “Il Barbieri di Siviglia” with much pleasure. (By then, he could no longer hear it.) He may not have laughed or made us laugh very often, but the spirit definitely moved him from time to time.