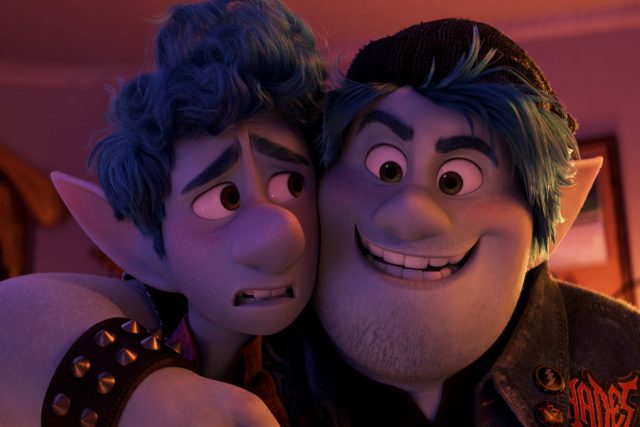 In the two years since John Lasseter left Pixar after sexual harassment claims, the animation studio has produced two features for Disney without its founder.

“Toy Story 4,” an excuse to revisit characters from a beloved franchise, won a nostalgia-driven Oscar without breaking any ground. “Onward” represents an attempt to go in a different direction. It’s a little more daring, more inclined to skirt the expected happy ending for a realistic one, if that word can be used about a story containing dragons and trolls. If it doesn’t rank with “Up” or “Frozen,” it’s refreshing in a dry Hollywood season.

Executive producer Pete Docter has assumed Lasseter’s role here. He directed the great “Inside Out” and knows that virtually every Pixar movie is about family: trying to find one, preserve one, rebuild or reunite one, create one from improbable connections. The definition of “family” has broadened over the years to include a lesbian Cyclops and a centaur in love with an elf, but we all pursue love where we find it.

Elf brothers Ian Lightfoot (Tom Holland) and Barley (Chris Pratt) discover a spell that can bring their long-dead father back to life for one day, giving them a sense of closure with him. It goes half-right, leaving them with a pair of legs that provide most of the sight gags.

To complete his resurrection within the 24-hour deadline, they have to find a hidden gem. They’re assisted by their plucky mom (Julia Louis-Dreyfus), her cop boyfriend (Mel Rodriguez) and a manticore, a creature with a human face, lion’s body and scorpion’s tail (Octavia Spencer, happily and aptly chewing the animated scenery).

“Onward” has magic aplenty to satisfy viewers weaned on video games and superhero movies. Ian and Barley suggest Frodo and Sam in “The Lord of the Rings,” one growing into adulthood as he reluctantly embarks on a mission and the other a burly, bullheaded sidekick full of good cheer. The goal, unknown to them, turns out not to be a reunion with their dead father but a union between the quarrelsome, oddly matched siblings. Spells protect and aid them, but love matters more than wizardry.

Director Dan Scanlon, who wrote the screenplay with Jason Headley and Keith Bunin, creates a world where pixies have forgotten how to fly (and become shaven-headed bikers!), unicorns eat from garbage cans, and the manticore’s flaming breath broils meat in her family restaurant.

Magic exists, yet no one but Barley believes in it. (We don’t really learn why.) The metaphoric message – look for magic in your own everyday life – comes across clunkily at times: Finding wonder in a back-yard flower hardly compares to creating an invisible bridge across a bottomless chasm. But the filmmakers’ hearts remain in the right place, a place worth visiting.

Pictured: OH BROTHERS – In Disney and Pixar’s “Onward,” two teenage elf brothers embark on an extraordinary quest to discover if there is still a little magic left in the world. Featuring Tom Holland as the voice of Ian Lightfoot, and Chris Pratt as the voice of Ian’s older brother, Barley, “Onward” opens in U.S. theaters on March 6, 2020. ©2019 Disney/Pixar. All Rights Reserved.