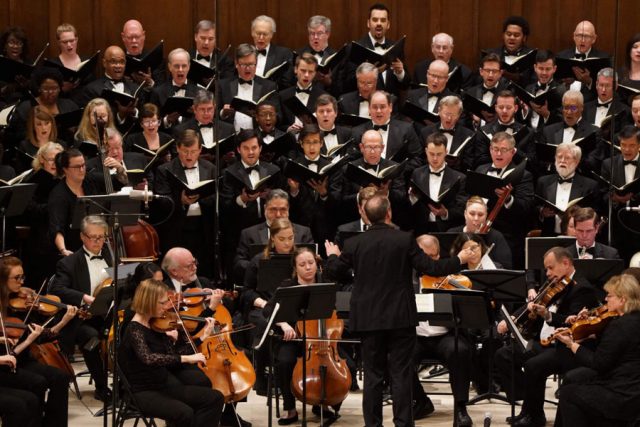 Beethoven’s Missa Solemnis, which premiered in 1824 after nearly five years of labor, breaks ground in more ways than you’d expect.

First, it’s longer than any significant mass up to that date except Bach’s Mass in B Minor, which was seldom heard in Beethoven’s lifetime. Second, it uses four soloists but doesn’t give anyone except the soprano a sustained, memorable melody.

Third, sacred music gets interrupted by secular elements. The Sanctus includes a long violin solo with orchestral accompaniment — almost a mini-concerto – that’s the most beautiful moment in the piece for me but raised the ire of purists. They were no happier about the war march in the Agnus Dei, where drums and trumpets interrupt the final prayer for peace. (This may have been inspired by Beethoven’s long fascination with Napoleon, who wasn’t subdued until 1815.)

Fourth, Beethoven didn’t care whether the Missa was done in a concert hall or a church; he sanctioned the performances of separate movements in concerts and repackaged the Kyrie, Credo, and Agnus Dei as “Three Grand Hymns with Solo and Chorus Voices.” We commonly encounter masses and requiems in theaters now, but that wasn’t the fashion 200 years ago.

You’ll get a rare chance to hear it when the Charlotte Symphony performs Missa Solemnis March 6 and 7 at Belk Theater. I know only one of the soloists – soprano Christina Pier, the best thing about Opera Carolina’s 2019 “Carmen” – but a lot of the emotional weight will come from Charlotte Master Chorale, the only chorus locally that could do justice to this monster.

Scholars question the nature of Beethoven’s faith, though not whether he had faith: He often spoke of a loving God who wanted the best for humanity.

Though he was raised a Roman Catholic, he didn’t attend mass regularly. He’d spent a year studying older forms of church music (notably Palestrina’s) when he undertook the Missa to honor Archduke Rudolf, his most famous pupil and patron. It was supposed to mark Rudolf’s installation as Archbishop of Olmütz in 1820, but Beethoven missed the deadline so far that it premiered in St. Petersburg, Russia, in 1824.

Perhaps Beethoven’s philosophy can best be summed up by his dedication to Rudolf: “Von Herzen—Möge es wieder—Zu Herzen gehn!” “From the heart – may it return to the heart!” That’s the wisest way to embrace any of Beethoven’s masterpieces.