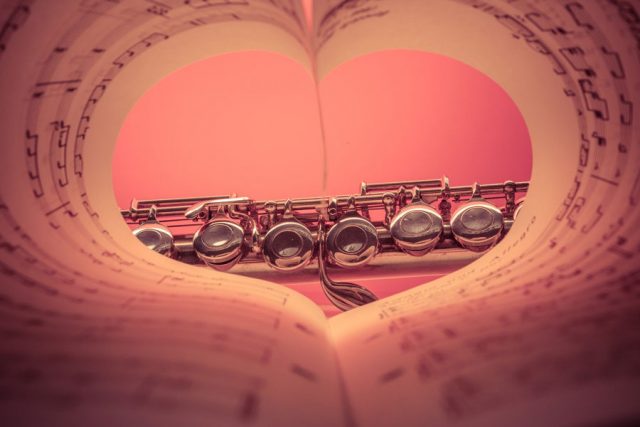 Some loves are instant and lifelong, and others take time to grow – whatever your path, it’s always the right time to fall in love with classical music. In celebration of Valentine’s Day, several of our staff members reveal the moment they found their First Classical Love:

“It was the summer of 1984, and I was living in Manhattan and between jobs. I had free time, so for most of the summer, I cooled off almost every afternoon in the Lincoln Center Library listening to Mozart from their wondrously expansive classical music LP collection. Back then I wasn’t too well versed in classical music, but I figured it was time to start expanding my education. I had recently seen ‘Amadeus’ on Broadway, so I knew I couldn’t lose with Mozart. One of the first albums that caught my eye was the Flute and Harp Concerto with James Galway and Marisa Robles. I was lucky to grab one of the turntable listening spots after a short wait, so I sat right down and began to listen. In a matter of moments, I found myself slumped in the chair with my eyes closed listening to some of the most glorious music I had ever heard. The sheer beauty transfixed me as if I had been enveloped in heavenly clouds. The second movement, Andantino, had me nearly in tears when the finale kicked in, culminating in Galway and Robles’s closing cadenzas with Ms. Robles’s glorious glissando bringing shivers down my spine.

The music ended and I opened my eyes with a big smile, knowing I had discovered something that would remain special for the rest of my days. Then I noticed a young lady standing in front of me, looking a little perturbed and impatient waiting for me to give up my turntable spot. I think there was a twenty minute limit for the listening posts, and I had been there the entire thirty minutes of the concerto. I apologized to her as I gathered my things and I stood in front of her for a moment before leaving, smiled and said, ‘Mozart.’ Her frown turned upside down into a big smile of recognition as I turned to return the LP to the shelf. That free time at the Lincoln Center Library brought me to a peaceful place I have since replicated many times simply by listening to Mozart.”

“My First Classical Love was Vivaldi… only I didn’t know it was Vivaldi at the time. I was about five years old, and I had a beloved LP that told the story of Puss ‘n’ Boots. I can still see the colorful cover: Puss was portrayed as a fluffy yellow cat with a dashing cavalier’s hat, tall leather boots and a flowing cape. I loved to play that record, but over time, I stopped listening to the story and started listening to the music between scenes instead. I didn’t know it at the time, but it was all by Vivaldi, mostly from his Four Seasons concertos and a few others. My favorite music was at the end, when Puss was triumphant and had been rewarded by his master for his loyalty and resourcefulness: a Vivaldi Concerto for Two Trumpets. Since then my tastes have evolved to include music by Beethoven, Vaughan Williams, and Philip Glass, among others – but that Vivaldi Concerto for Two Trumpets remains my First Classical Love.”

“My first, if not the first clear memory of enjoying classical music came as a young elementary school-age kid in Boston. The composition was Tchaikovsky’s 1812 Overture. It was a sunny, hot July 4th celebration moving into a warm, muggy evening at the Boston Esplanade on the Charles River. Arthur Fidler was conducting the Boston Pops. This piece was (and still is) the ‘big finish.’

My mother was always the impetus when sharing classical music on local public radio.  It was a constant around our home. My Dad, brother and I followed her lead. Dad, being a career Army Artilleryman, found this 1812 Overture extra special with the Massachusetts Army National Guard’s 101st Field Artillery Battalion’s lineup of several howitzer cannons, which expelled round after round of thunderous blasts for the climactic finish. Fidler in his white jacket and baton is still a vivid memory with the stunning arrangement of the orchestra, the artillerymen in their combat fatigues, and the fireworks in the sky with Boston’s scenic skyline as a background. It was a memorable Independence Day celebration.”

“My exposure to classical music before college began and ended with a homemade mix CD my opera-loving best friend burned for me. I had always been a musical theatre and choir kid, so even though I recognized that the pieces were beautiful, the music didn’t ‘click’ with me until a few months later during my freshman year of college. Wanting to embrace all of the opportunities available to me, I decided to audition for the spring opera, Mozart’s The Magic Flute. How different could it be from musical theatre, right?

To my surprise, the rehearsal and preparation process was unlike anything I had ever tried before. Something about the physical challenge of popping high A flats while safely handling a prop dagger gave me a new level of respect for the art form, and I suddenly found myself listening to every opera recording I could get my hands on in my free time. Plus, there’s a reason The Magic Flute has been such an enduring staple of the repertoire; the score and storyline are pure magic. That production was the beginning of a penchant for classical music, and opera in particular, that will be with me for life. And yes – I fished that mix CD out from a stack of high school mementos, and it’s been in my car’s CD console ever since.”

Our listeners warm our hearts every day, but we are especially grateful for their First Classical Love stories this Valentine’s Day – because of their experiences, we found each other! Read a few of our favorites:

“My brother was a freshman in college (Harvard) and brought home a beautiful LP of Swan Lake and Borodin’s Polovtsian Dances. After listening to that record once, I was hooked. A small town boy from Alabama was forever thereafter enthralled by classical music.”

“When I heard the Concierto de Aranjuez by Joaquin Rodrigo, it touched my heart. I had just lost my mom to cancer the previous year, and my grandparents were from Spain. Whenever I hear it, it brings me memories of her.”

“My earliest memory of classical music was my grandmother playing the Beethoven Moonlight Sonata on the piano, accompanied by my grandfather on his violin. Later, Mrs. Larsen tried to teach me piano and Miss Lois tried to make a ballerina of me. Alas – I had NO talent, but I could NEVER forget the music.”

“My first classical love was… YOU! As a teen, I stumbled across WDAV on my way to finding rap and Top 40 music. Much to my parents’ delight, I fell in love with classical music. Thanks for being the soundtrack for my life.”