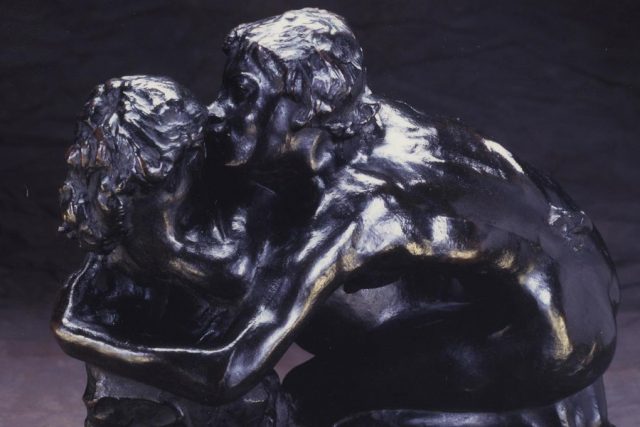 The Van Every-Smith Galleries at Davidson College have a significant exhibit that runs January 23rd through April 5th. Auguste Rodin: Truth Form Life features 22 works by the French sculptor who, at his peak, many regarded as the greatest since Michelangelo.

Rodin’s career covered a period that saw extraordinary change not only in the visual arts but also in music. The hosts were inspired by works featured in the collection and share what music came to mind.

Rodin often sculpted a single body part so he could concentrate on it before moving on to a larger work encompassing more of the human body. His Large Hand of a Pianist falls into this category.

When I look at this sculpture, I immediately notice the gracefully curved wrist and the fingers which are poised to strike the piano’s keys. There is strength in this hand, yet there is also a delicate, almost playful way the hand is poised to caress the keyboard. Rodin’s Large Hand of a Pianist brings to mind the many (more than you’d imagine) compositions for piano left hand. Because Rodin’s hand displays strength and agility, it makes me think of Camille Saint-Saens Études for Piano Left Hand.

Only through continued practice with the left hand, could an artist gain the strength and flexibility needed to be on the concert stage. Rodin’s Left Hand of a Pianist demonstrates all the physical attributes a great pianist would need.

The Monumental Torso of the Walking Man by Auguste Rodin evokes in my imagination Aaron Copland’s Fanfare for the Common Man. The composer was just a child when Rodin created this work in 1905. Nevertheless, its bold modeling, bronze casting, and the figure’s majestic proportions are all complemented elegantly by this music.

The sculpture of Jean D’Aire is one of six done by Rodin to commemorate six citizens of Calais who offered themselves as hostages to the English in hopes the Brits would end a siege of Calais.  The music that comes to mind is Tchaikovsky’s Meditation from Memories of a Dear Place. I choose it because there could never be more generous proof of how “dear” Calais is to Jean D’Aire than his offering his freedom (and probably his life) so that the city would be delivered from its attackers.

Rachel Stewart, Host of Biscuits and Bach, shares her thoughts on:

In both of these artistic creations one can see the beginnings of a new modern era in western culture. Through daring originality of both form and content, Rodin and Debussy invite a re-evaluation of the status quo.

A number of composers have written music inspired by the literature of Victor Hugo. Hugo’s novels, plays and poems have been a great source of inspiration for musicians, stirring them to create not only opera and ballet but musical theatre such as Notre-Dame de Paris and the ever-popular Les Misérables.

We often forget that Amilcare Ponchielli’s most popular work, his 1876 opera, La Gioconda, was based on Hugo’s 1835 play in prose, Angelo, Tyrant of Padua. The opera contains the famous ballet sequence, Dance of the Hours, which was recreated in its entirety in Walt Disney’s 1940 classic film, Fantasia. The ballet is also the musical source for a famous satirical song by Spike Jones and His City Slickers and Hello Muddah, Hello Faddah by Allan Sherman.

To learn more about the Auguste Rodin: Truth Form Life, click here. And listen to 89.9 WDAV during middays each week to hear some of the musical works that premiered around the time of Rodin’s magnificent sculptures.