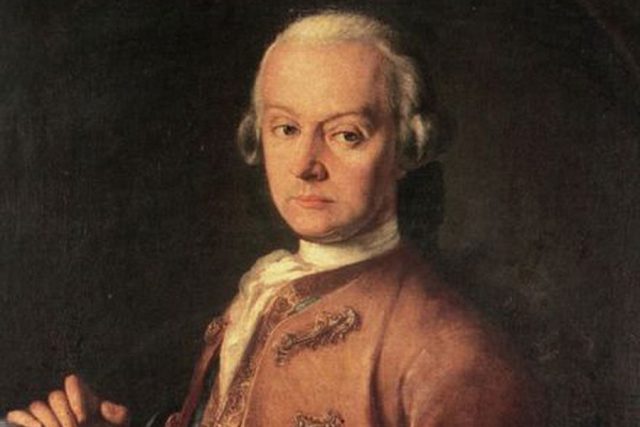 November 14, 2019WDAV BlogMy Year with Mozart, News & Features, UncategorizedLawrence ToppmanComments Off on Daddy Dearest – or was he?

Among musical anniversaries not celebrated in 2019, one stands out: Leopold Mozart was born 300 years ago on November 14. Of all the fathers in the history of classical music, he did the most to help and hinder a genius.

Peter Hall’s “Amadeus” (which debuted 40 years ago last week at London’s Royal National Theatre) found an antihero in Antonio Salieri: A composer of limited gifts who delights in Mozart’s music while jealously obsessing over him. That description might also be applied to Leopold.

On the plus side, he introduced the boy and his sister to European royalty on concert tours when they were keyboard prodigies; he continued to usher teenaged Wolfgang around after Nannerl dropped out. He became the first teacher for both while serving as deputy kapellmeister to the court at Salzburg, though he never achieved the position of kapellmeister (master of music).

He worked hard to find his son a permanent position in Salzburg, though without success and eventually against WAM’s wishes. The old man even took over the raising of little Leopold, his grandson, possibly to relieve the stress in Nannerl’s dysfunctional household and possibly in hopes of finding another wunderkind.

But on the other side…. He never granted Mozart the independence a young person needs to mature, bullying him in letters for as long as they corresponded. (Leopold died four years before his son, who was so estranged he didn’t know his father’s condition.) He warned Wolfgang against anything that would take him out of dad’s orbit and control, especially potential romantic entanglements and time spent in foreign cities.

At the same time, he complained about his own poverty – evidence about Leopold’s finances varies – to get Wolfgang to support him, and he seldom seems to have expressed interest in his son’s masterpieces after Wolfgang left home permanently in 1781. He even blamed the 22-year-old composer for neglect that led to his mother’s death, when she succumbed to an undiagnosed illness on a tour to Paris.

Leopold could write entertaining music. I like his Toy Symphony and especially his Peasant Wedding, which includes bagpipes and hurdy-gurdy and requires orchestra members to whoop and whistle. But his symphonies, concertos and serenades – all genres in which his son excelled – have been forgotten. Perhaps he anticipated that, and foreknowledge led to a toxic cocktail of love, envy and self-pity.