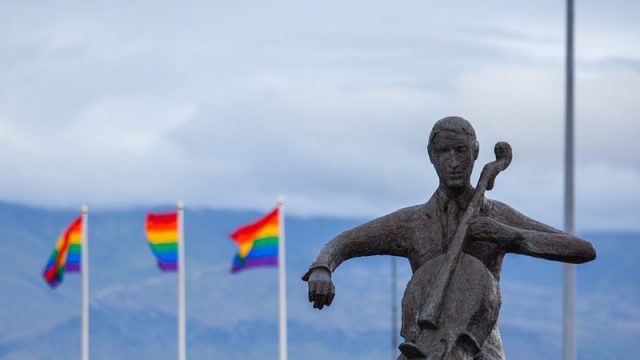 Even though the official U.S. Pride Month is in June, Charlotte has extended the celebration, with its regional Pride Week approaching in mid-August 2019. Amidst all of the fun and raucous excitement of Charlotte Pride, we wanted to remind you of a few classically-pertinent events to add to your Charlotte Pride festival calendar.

Namely, we’re talking about the two LGBTQ+ affirming choruses in town: One Voice Chorus and the Gay Men’s Chorus of Charlotte.

The One Voice Chorus dates back to 1989, when it began with five Charlotteans hoping to create an accepting choral community for local LGBTQ+ individuals. Today One Voice has grown to include 70 singers, support members and staff. According to the website, One Voice was, “One of the pioneering gay-affirming choruses in the ‘Deep South.’”

In fact, still today One Voice represents one of fewer than a dozen LGBTQ+ choruses in the U.S. that allow women and men to perform together. One Voice’s general choir is non-auditioned, but it also includes a smaller, auditioned ensemble, Sotto Voce, which travels to perform around North Carolina and other neighboring states.

The Gay Men’s Chorus of Charlotte (GMCC) has been a more recent addition to the Charlotte LGBTQ+ arts scene. Founded in 2006 by Artistic Director John Quillin, GMCC is made up of a general chorus as well as a smaller performance ensemble, 7th Son. According to a feature on the GMCC in Charlotte’s LGBTQ+ arts and entertainment publication, qnotes, Artistic Director Quillin has given a lot of attention to commissioning works by LGBTQ+ composers that spotlight LGBTQ+ issues. To date, the GMCC has commissioned Eric Lane Barns’ “Our Number One Problem,” which protests North Carolina’s HB2 law, and “At the Heart” by Garold Gurs, a song about a family whose daughter came out as trans at age four.

In January 2019, the GMCC became the first gay choir to sing for a professional sports team in North Carolina. The group sang before and at the halftime of the Charlotte Hornets inaugural Pride Night game.

This August’s Charlotte Pride festivities provide opportunities to attend performances from both One Voice and the GMCC. The Gay Men’s Chorus of Charlotte will make a “special appearance” at Saint Martin’s Episcopal Church’s Pride Mass on Friday, August 16, 6:30 – 7:30 p.m. One Voice Chorus will perform from 1:00 – 1:30 p.m. on Saturday, August 17 at Flourish, Charlotte Pride’s “mini-arts festival” hosted at the Bechtler Museum of Modern Art. The larger Flourish LGBTQ+ arts festival will continue from 1:00 – 5:00 p.m.