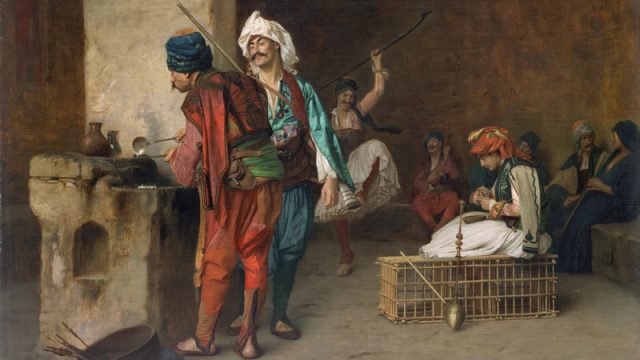 July 25, 2019WDAV BlogMy Year with Mozart, News & Features, UncategorizedLawrence ToppmanComments Off on Turkey – a delight and a terror to Vienna

Perhaps you’ve read the recent news that Turkey has bought a surface-to-air missile system from Russia, making America and Europe wonder once again where that nation fits in the scheme of international diplomacy. Turkey, connecting the west to the east across the narrow Bosporus, has long puzzled and fascinated Europeans, especially in the time of Mozart and beyond.

The Orientalism movement in the arts came from the generation after Mozart. Napoleon occupied Egypt from 1798 through 1801, and Europeans first visited the Middle East in significant numbers. Painters (the best being Eugène Delacroix) set works of splendor and cruelty there, not always travelling outside their home countries to get facts.

In Mozart’s time, Austrians viewed the declining but significant Ottoman Empire as a menace. It had tried to conquer western Europe in the late 1600s and had gotten as far as the outskirts of Vienna. The Austrians and Turks fought wars again in 1716-1718 and 1735-39, with Austria and Russia teaming up to defeat the Islamic enemy 17 years before Mozart’s birth.

Young WAM never visited Constantinople on his tour of major cities as a child and never went east of his homeland as an adult. But images of harems, autocratic sultans and janissaries (mercenaries who fought for the Ottoman emperor) swirled in his head.

He first gave them musical shape in the “Turkish” finale of his Violin Concerto No. 5, where slashing martial rhythms interrupt a calm rondo with exciting results. Later, he wrote a “Rondo alla Turca” as the pounding finale to his Piano Sonata No. 11.

His best-known Turkish work remains “Die Entführung aus dem Serail” (“Abduction from the Seraglio”), an opera without recitatives. There the Spanish nobleman Belmonte attempts to rescue his beloved Konstanze from Pasha Selim, who has bought her from pirates. Mozart showed unusual enlightenment for the time, depicting Selim as a benevolent man who not only frees Belmonte when he’s captured but allows him to depart with his betrothed.

This musical craze burned out after about 50 years, though Beethoven added one more fine piece to the repertoire: The “Turkish March” from his incidental music for the play “The Ruins of Athens.” My own favorite Turkish-themed music, the full-length “Turkish” Symphony in C, comes from Franz Xaver Süssmayr – who’s known today only as the guy who completed Mozart’s Requiem.