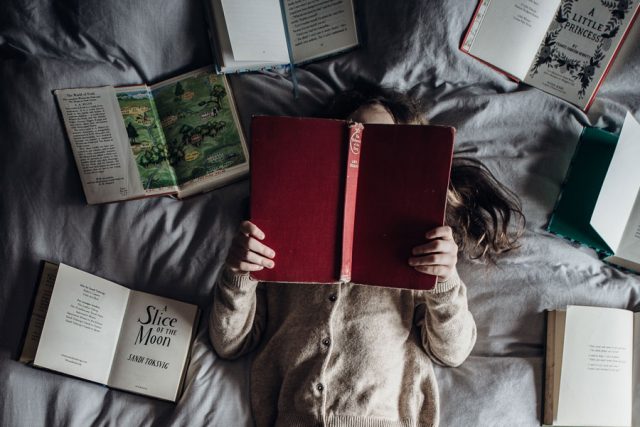 Description: A delightful retelling of Russian composer Igor Stravinsky’s artistic collaboration with dancer/choreographer Vaslav Nijinsky for the orchestra and ballet production, Rite of Spring. First performed in Paris in 1913, the production was monumentally different than anything that had been seen or heard before in the world of classical music and dance. In fact, it was so groundbreaking that it incited a riot among the audience at its premier. The book brilliantly illustrates the story of two artists daring to be different, thus encouraging young readers to use their creativity to push the boundaries of artistic expression as well.

The Dance of the Violin by Kathy Stinson (Annick Press)

Age: preschool and elementary; ages 4 to 8

Description: The whirling, colorful images that accompany this story about violinist Joshua Bell’s first musical competition at age 12 attract musical kids to a relatable story about the trial and error process involved in musical training. Even Bell, an internationally-renowned violinist, didn’t play perfectly during his first competition. The story is a fun read, and encourages kids to try their best and let the music support them, even when it doesn’t come out sounding flawless.

Description: A beautifully-illustrated history of African American contralto Marian Anderson’s impressive vocal career during the first half of the 20th century. Born in Philadelphia and raised singing with the church choir at her family’s local Baptist church, Marian’s voice was outstanding from the beginning. As an African American woman, however, she faced obstacles to pursuing her dream based on the color of her skin. This book tells the empowering tale of Anderson’s efforts to prove to the world that she could sing to the heights that she believed she could. A refreshing take on the history of classical music, demonstrating the can-do attitude that led one African American woman to lift her voice in song for diverse audiences around the world.

For the Love of Music: The Remarkable Story of Maria Anna Mozart by Elizabeth Rusch, Illustrated by Steve Johnson and Lou Fancher (Tricycle Press)

Description: An inspiring account of the other Mozart prodigy, albeit one far less remembered–Mozart’s older sister, Maria Anna. The book recounts the life of Maria Anna, a piano prodigy from an early age, as well as a heavy influence on her brother Wolfgang’s musical development. Although Wolfgang was permitted to travel and develop further as a musician once he grew up, Maria Anna stayed back. She would eventually marry and spend most of her life as primarily a wife and mother. Still, she continued playing the piano and teaching young musicians until her dying day. The book provides an important reflection on the erasure of women in much of classical music history. This hidden story related to one of the world’s most famous classical composers is sure to intrigue any curious child.

Watch: The Papageno duet from Mozart’s opera, The Magic Flute.
It’s said to be one of the last pieces Maria Anna Mozart played on the piano, blind and with one working hand, before her death

Description: This is the true life story of Patrick Sarsfield Gilmore, an Irish immigrant to the U.S. who is considered to be one of the founding fathers of American big band music. Gilmore’s musical legacy demonstrates the power of music to bring people together and promote peace. After the Civil War, Gilmore arranged a National Peace Jubilee in 1869, in which bands, orchestras, and choirs from across the nation converged in Boston for a grand performance honoring the end of the war and the restoration of peace. Gilmore’s story reminds us all that attempting an unbelievably big project in the name of peace and unity can bring surprising amounts of support from the broader community. Through music, Gilmore left an impression on not only the American band music tradition, but also a legacy of music as a means for unity and togetherness.

Description: In alignment with its title, this book is a great gateway into the realm of orchestral music for a wide range of musically-inclined youth. The fun, accessible narrations of a Norwegian troll named Tormod make the reading a breeze as readers explore the orchestra alongside him. The book includes a short lead-up story as Tormod first encounters the orchestra, and then delves into more in-depth pages on different orchestral instruments. Unlikely to be read all the way through in one sitting, it’s a great reference book for the orchestrally-curious child to have around and explore at leisure.

Watch: ‘In the Hall of the Mountain King’ from Peer Gynt Suite No. 1 by Edvard Grieg, performed by the Berliner Philharmonic

Peter and the Wolf by Chris Raschka, based on the original work by Sergei Prokofiev (Simon & Schuster)

Description: Peter and the Wolf is a “symphonic fairytale for children” written by Sergei Profokiev in 1936. The piece includes narration that tells the story while the orchestra illustrates it with sound. The illustrated picture book by Chris Raschka brings the story to life through images as well. You can find the entire Peter and the Wolf soundtrack on Spotify, or watch the live orchestra performance linked below. Then spend the next 30 minutes snuggled up with your kids enjoying the orchestra’s melodies while enjoying the twists and turns of this classic kids fairytale.

Watch: an orchestral performance of Peter and the Wolf, presented by the Vancouver Symphony Orchestra