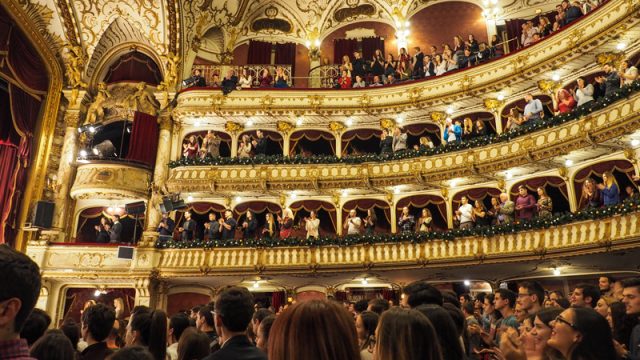 June 13, 2019WDAV BlogMy Year with Mozart, News & Features, UncategorizedLawrence ToppmanComments Off on Making A Masterpiece Out of Mediocrity

Joe Ceremsak, my history teacher in my junior year of high school, once defined genius as seeing the potential for success in others’ failures. I was listening to “The Beneficent Dervish” last weekend and realized how true that is. (Another time, he told us to marry people for their brains and personalities, not their looks. Of course, we rolled our eyes: He was old.)

Any composer given a dazzlingly witty or searingly dramatic libretto might turn out an inspired score. But Mozart wrote “The Magic Flute” using the same kind of literary hodgepodge Emanuel Schikaneder had already handed Mozart’s contemporaries over the previous year.

Schikaneder took over the Theater auf der Wieden in a Viennese suburb in May 1789. He not only produced and wrote plays – usually singspiel, a mixture of music and dialogue – but took the baritone leads himself. Paul Wranitzky’s “Oberon” became a hit, so Schikaneder decided to write three more fairy-tale operas over the next 18 months: “The Philosopher’s Stone,” “The Beneficent Dervish” and “The Magic Flute.”

Not to say he followed a formula, but all three heroes are princes accompanied by goofy companions. (Schikaneder took the latter roles.) They go through trials to win the hands of princesses, while their sidekicks end up with earthy partners. A benevolent guardian with mysterious powers guides these princes, warding off evil and handing out protective gifts: a sword and a bird in “Stone,” a pouch, drum and bells in “Dervish,” a flute and bells in “Flute.”

Mozart took a hand in “Stone,” though the bulk of it seems to have come from Johann Baptist Henneberg, Benedikt Schack, Franz Xaver Gerl and Schikaneder himself. I have listened to it and couldn’t find anything identifiably Mozartean, though he’s so versatile it’s hard to pin down a Mozart “style.” After hearing “Dervish,” I see why we’ve never heard any more compositions by the other guys, whose lack of memorable melodies and harmonic invention earned them obscurity.

But look what Mozart did when writing by himself in “Flute!” He terrifies us with the Queen of the Night’s vengeance aria, soothes us with Sarastro’s mellow musings, makes us laugh at Papageno’s antics and endows Tamino and Pamina with nobility and passion. He took the same cornball materials Schikaneder supplied to his contemporaries and elevated them to greatness. That’s a genius at work.