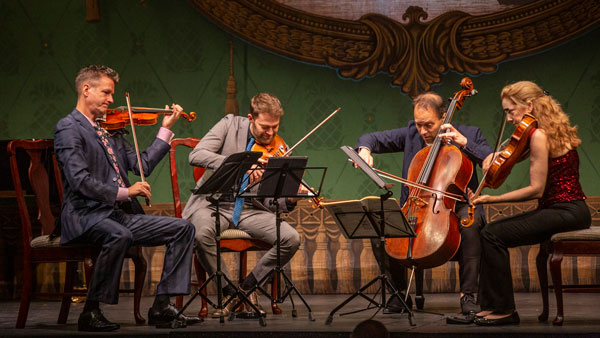 Every fine chamber musician plays with precision, intelligence, energy and taste. But the ones at Spoleto Festival USA also play with love, and that makes all the difference.

Violinist Geoff Nuttall, who programs the Bank of America Chamber Music series with wide-ranging inclinations, places no composer above Franz Josef Haydn. When he and the rest of the St. Lawrence String Quartet perform Haydn’s Emperor Quartet – the one with the Viennese national anthem in the slow movement – they tear into it like kids unwrapping presents on Christmas morning.

They may have been especially eager to rock Dock Street Theatre last weekend, because a PBS film crew came to Charleston to shoot footage of an episode of “Now Hear This.” Nuttall informed the audience that PBS would broadcast this series devoted to classical composers – reportedly the first in 50 years on prime-time TV – starting in September.

Yet the players gave the same intensity to “Closed Universe,” a dense and mysterious piece by composer-in-residence Paul Wiancko, or to a virtuosic, throwaway piccolo concerto by Vivaldi. Their joy shoots over the footlights and jolts the audience each time.

More than ever, this series offers three pleasures. The first – a drawback, if you dislike contemporary music – is that you can almost never attend back-to-back concerts now without encountering living composers. I heard four: Philip Glass, Wiancko, Larry Alan Smith (who wrote the solo “Three Angularities” for his oboist son, James Austin Smith) and Doug Balliett. The latter gave the regional premiere of “Echo and Narcissus,” narrating and playing double-bass in this tale from Ovid’s “Metamorphosis.”

The second is the willingness of world-class artists to take occasional minor roles out of a sense of comradeship. Countertenor Anthony Roth Costanzo sang vocal interludes in Balliett’s “rap cantata,” none of them more than about 45 seconds. Pianist Inon Barnatan, who’ll open the Charlotte Symphony’s 2019-20 Classical season with Tchaikovsky’s First Concerto, will show up near the end of the festival (June 5-9) to join in a Faure quartet, a Beethoven trio and a 12-person adaptation of the overture to Rossini’s “Barber of Seville.”

The third involves no music at all. Conversations from the stage enlighten and amuse, providing entry points to obscure pieces. The self-taught Wiancko explained that he had written nothing for years, absorbing influences from jazz and blues and punk-rock and “a little bit of Brahms,” and you could hear those as he strummed his cello and tickled a glockenspiel in “Universe.” (Perhaps not the punk-rock.)

These introductions could become a trend. The founder of Compagnie Hervé Koubi told the Gaillard Center crowd about his upbringing in Southern France, his Algerian heritage, his Jewish father and his belief that his street dancers are not employees but his “brothers” from around the Mediterranean and Africa: Burkina Faso, Algeria, Israel, Italy, Spain and other lands.

What he did not say was how to approach “What the Day Owes to the Night.” Like the music that accompanied it – a mashup of Sufi mysticism, J.S. Bach and the Kronos Quartet with vocalist Hamza El Din – Koubi’s 13 dancers, all of them acrobatically gifted and many of them with strong breakdancing chops, seemed to be moving in a quasi-religious trance and trying to induce one in us.

This company occupied the opening weekend spot often reserved for celebrated ballet or modern troupes, which do long mixed programs. Koubi’s lone piece lasted just over an hour, and he exhausted his movement vocabulary after 15 minutes. The ensemble remained onstage the whole time, with small groups emerging briefly from the mass, and “Day” slowed down for only a few moments near the middle.

Koubi seldom varied the cycles of arms reaching to heaven, bodies spinning upside-down or upright in dervish-like whirls, leaps and rolls and falls interrupted briefly by meditative sections. Time seemed to stop – a satisfying thing if you were in sync with Koubi’s repeating rhythms, a painful one if you weren’t.