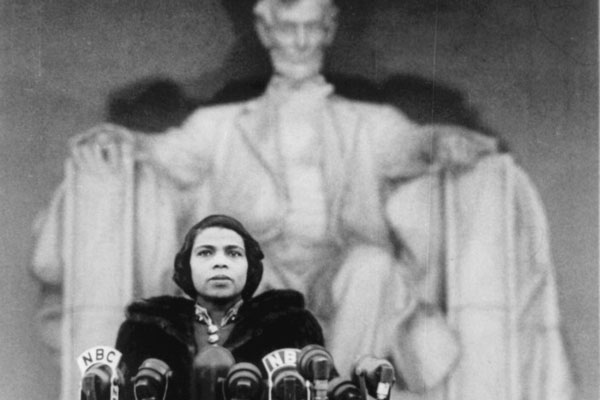 “This will be the day, this will be the day when all of God’s children will be able to sing with new meaning: ‘My country ‘tis of thee, sweet land of liberty, of thee I sing. Land where my fathers died, land of the pilgrim’s pride, from every mountainside, let freedom ring!’”

Such were the jubilant words of Dr. Martin Luther King, Jr., in his “I Have a Dream” oration on the steps of the Lincoln Memorial on an August afternoon in 1963. King was speaking – and singing – at the March on Washington for Jobs and Freedom, a seminal moment in the Civil Rights Movement and in the history of the United States. Years earlier, in the same auspicious spot, renowned vocalist Marian Anderson enunciated those same lyrics.

Anderson, born in Philadelphia in 1897, was acquainted with music from the start. First opening her mouth to sing at her local Baptist church, Anderson could soon seamlessly provide the soprano, alto, tenor, and bass parts for a vocal work.

Her wider success burgeoned remarkably, but was encumbered by the racial underpinnings of American society in the early part of the 20th century. Anderson’s prominence on the American cultural scene was vehemently resisted. Her undeniable mastery of performing daunting pieces, however, attracted influential figures in the greater world of classical music.

With the support of Italian voice teacher Giuseppe Boghetti, Anderson made a splash in Europe, filling opera halls and royal courts with her indelible voice.

Later that year Anderson returned to the United States, making her American ‘debut’ at Carnegie Hall in New York – despite having a freshly broken ankle, which was cleverly concealed beneath her floor-length gown. Her performance was remarkable enough to land her at the White House for her next appearance – the first African-American to do so. First Lady Eleanor Roosevelt, who extended the request to Anderson, would prove an enduring ally in the challenges Anderson would continue to grapple with.

In the late 1930s, the specter of war hung over much of the world. News of ruthless rulers and systematic oppression flooded the American media. The inevitable outbreak of war in Europe and Asia, with all its orchestrated malice and newfound cacophony, left many Americans anxious, uncertain, and perhaps more willing to indulge their own prejudices with a bit more abandon.

When Marian Anderson’s manager Sol Hurok attempted to book her at the Daughters of the American Revolution’s Constitution Hall in Washington, DC, the near-universally acclaimed artist was rebuffed. Outraged groups like the Brotherhood of Sleeping Car Porters, the American Federation of Labor, and the National Negro Congress banded together to form the Marian Anderson Citizens Committee (MACC).

Despite the committee’s efforts to pressure the DAR to allow Anderson to perform, the DAR refused to budge. Eleanor Roosevelt quit the DAR in public protest over the organization’s move, writing about her resignation in her well-circulated My Day column.

“To remain a member,” Roosevelt wrote, “implies approval of that action, therefore I am resigning.”

Working in concert with the MACC and President Franklin Roosevelt, the First Lady secured Anderson a place to perform on the steps of the Lincoln Memorial. A racially diverse audience greeted Anderson on a sunny Easter morning in April of 1939.

Anderson, in a performance coursing with emotion, worked through some of the traditional American musical repertoire like “My Country ‘Tis of Thee.” Anderson closed, however, with a resounding rendition of “Nobody Knows the Trouble I’ve Seen,” an African-American spiritual.

Each piece was a part of the American puzzle, a puzzle over color and lyric and voices. That puzzle persisted throughout the coming decades, becoming part of Dr. King’s life and work. Hearing Anderson’s performance at a young age, King would later note that Anderson was a formative presence in his life. Anderson would join King on the steps of the memorial to President Lincoln in 1963, resounding her voice once more across the land that had once refused her.

Both Anderson and King recognized the soaring value of music in addressing injustice and indifference. Carrying on that legacy of musical appreciation and social activism is as fitting a tribute as any to their memories.