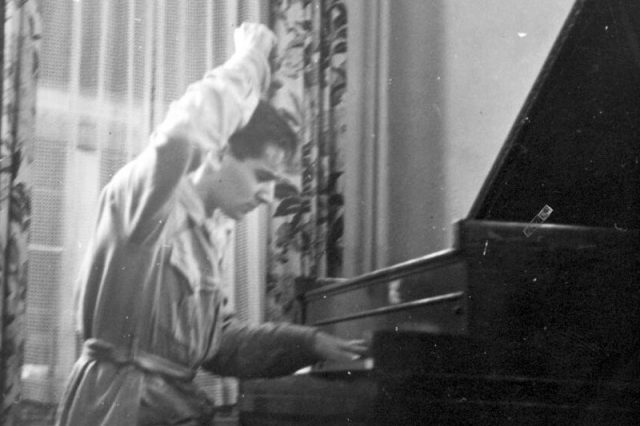 During his years at Harvard, Bernstein wrote two major works, The Occult and his Bachelor’s thesis “The Absorption of Race Elements into American Music”. The search for appreciation and acknowledgment seems to permeate through both works.

The first of these, The Occult, written in 1938, was a fictional account of meeting Dimitri Mitropoulos. Mitropoulos was a well-known composer and conductor at the time. The two met at a reception for the Greek Society at Harvard, at which Mitropoulos invited Bernstein to attend the Boston Symphony Orchestra’s rehearsals the following week leading up to their weekend performance that Saturday.

The fictional account changes the names of people and places (ex. Leonard Bernstein to “Carl Fevrier” and Dimitri Mitropoulos to “Eros Mavro”), but clearly follows these events, adding references to Greek mythology and hyperbole to allude to this being like an Epic in feel.

Bernstein notes that America, unlike many other nations, cannot be identified with a single racial or ethnic background, which limits the material nationalism that represents the entirety of the nation and restricts American composers to mostly imitating Europeans. However, Bernstein argues that musical elements in the African American tradition, specifically Jazz, provide the material nationalism source for American composers to make art music representative of the nation as a whole and embody spiritual nationalism.

The American composers he believes have overcome this using these are Copland and Gershwin. He uses Gershwin’s “Rhapsody in Blue” as an example of merging material elements from Jazz into spiritual nationalism in American art music. Copland also provided invaluable feedback and guidance to Bernstein while he was working on his thesis.