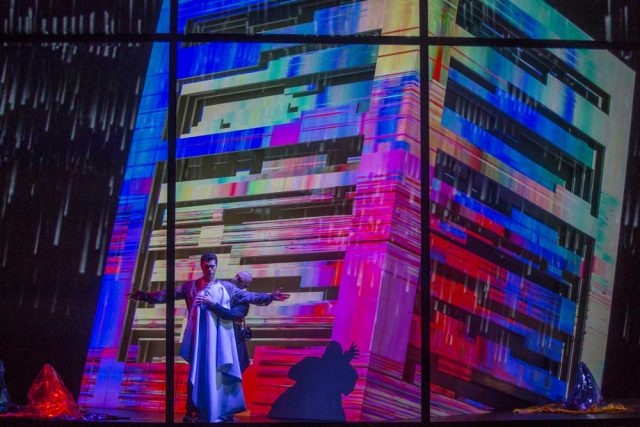 Pictured: Elliot Madore in the US premiere of Tree of Codes, with music and libretto by Liza Lim. Photo by William Struhs.

Every opera at Spoleto Festival USA that gets a U.S. premiere – in this case, both fully-staged offerings for 2018 – begins as a mystery. Have long-lost pieces by masters been unreasonably neglected? Have current composers remained obscure for a reason?

On the evidence of Gaetano Donizetti’s “Pia de’ Tolomei” and Liza Lim’s “Tree of Codes,” which run in repertory through June 8, I’d answer “Yes” to both questions.

Donizetti and librettist Salvatore Cammarano, who collaborated on eight operas, premiered “Lucia di Lammermoor” in 1835. “Pia” came along two years later and seems like a little sister: Beautiful, worth knowing, but living in the shadow of an immortal. 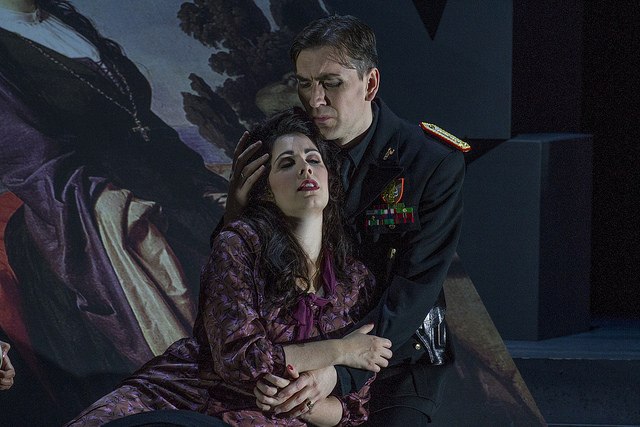 The authors took “Pia” from a quatrain in “Purgatorio,” where Dante writes of people who were penitent at the times of sudden violent deaths. Nello, Pia’s jealous husband, imprisoned her after an accusation of infidelity by Ghino, who wanted her but couldn’t tempt her. The man she keeps in the shadows is her brother, Rodrigo, who has escaped jail as a political refugee.

The libretto’s no clumsier than most from the mid-19th century, and director Andrea Cigni makes it more plausible and relevant by updating it to Fascist Italy in the pre-war 1930s. Rodrigo has been jailed not for belonging to a different family but for leading the Resistance; Ghino’s unconvincing fatal wound in battle in the original narrative has become an accidental killing at the hands of sentries. 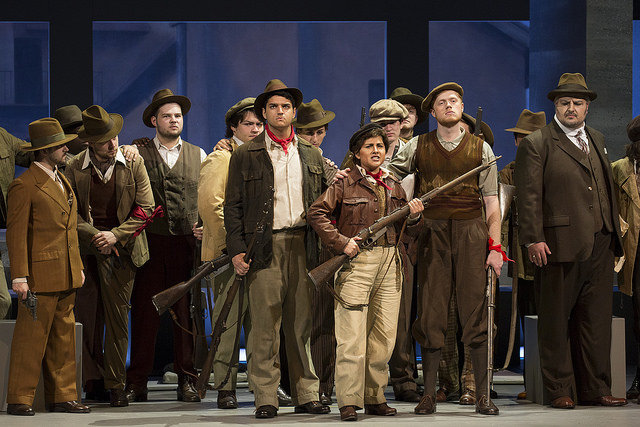 Pia now tries to save great art from destruction by right-wingers, including a portrait of her by Eliseo Sala (painted after the opera premiered). This irrelevant but unobtrusive subplot doesn’t hold the production back. Nothing could on opening night, including a power outage at Sottile Theatre that left only one floodlight operating at last. (Well, the final scene is set in a dungeon.) 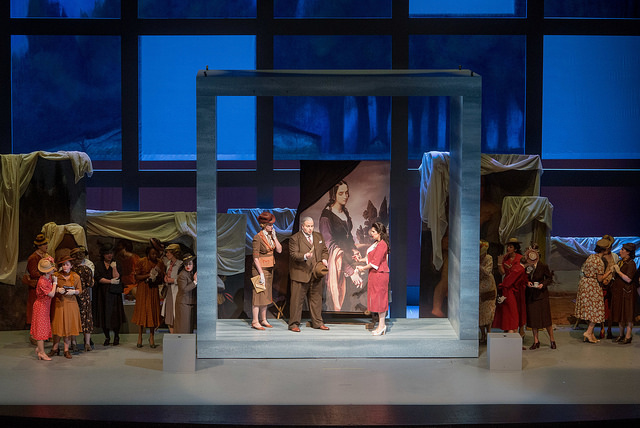 The melodies show Donizetti near the peak of his skill, from one of the soprano-mezzo duets he loved — this time in friendship, not enmity — to a somber “Lucia”-like ensemble for four soloists and chorus. Amanda Woodbury’s creamy soprano served the title role well, and Cassandra Zoe Velasco’s hefty voice made Rodrigo a presence with whom to be reckoned. Isaac Frishman’s small, flexible tenor put Ghino’s arias across in the smallish hall, and baritone Valdis Jansons brought unexpected complexity to the mostly snarly Nello.

Spoleto’s pick-up orchestra, augmented in “Pia” by Westminster Choir, remains a marvel, and Lidiya Yankovskaya conducted with the brio and tenderness this opera demands. Those same musicians played with equally scrupulous dedication for conductor John Kennedy in “Tree of Codes,” though nobody in the audience would’ve known if they’d hit clinker after clinker. 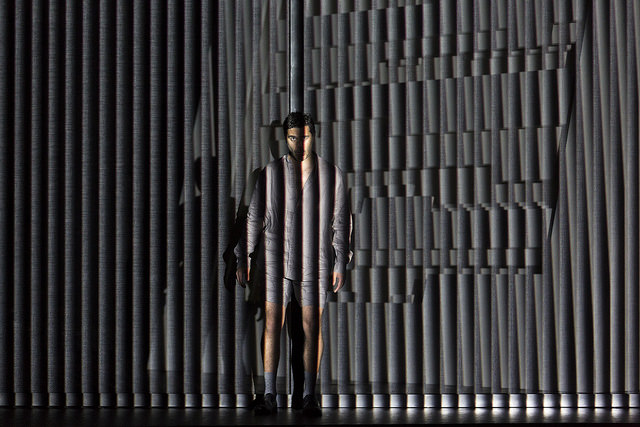 Elliot Madore in Tree of Codes, with music and libretto by Liza Lim. Photo by William Struhs.

Virtually everything about Lim’s opera seemed random, from the wisps of orchestration to the rambling dialogue. (She wrote her own libretto.) Extensive program notes promised a philosophic piece I’d like to have seen onstage but never did, except for hints of one theme: Received wisdom from the past lies heavily and perhaps foolishly on us in the present.

The disconnection between idea and execution began with Scott Zielinski’s set. According to the notes, an “onstage monolith evokes the loss of Jewish lives in the last century, which is the loss for all mankind.” This edifice resembled a maquette for a six-story parking deck that had sunk into the ground at a 30-degree angle, and nothing in the text referred to it. (I did enjoy the lights that slashed across it, from bilious green to celestial white.) 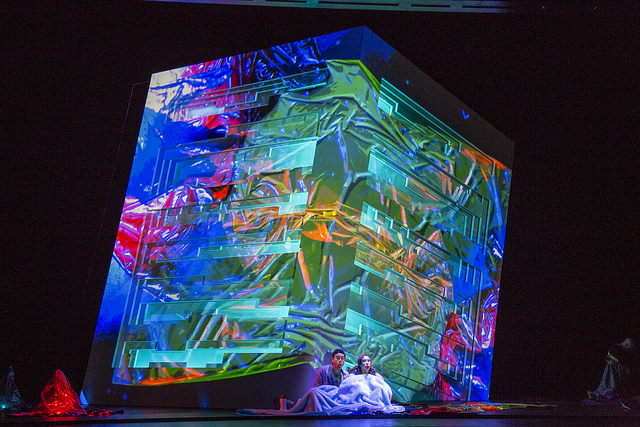 Elliot Madore and Marisol Montalvo in the US premiere of Tree of Codes. Photo by William Struhs.

Soprano Marisol Montalvo and baritone Elliot Madore had excellent pitch and diction as Adela, a mystic, and Son, a boy mourning (or perhaps simply missing) his father. Yet singers can’t seem anything but ridiculous while sitting at center stage, clutching megaphones and repeatedly uttering “I wish. I want. I wish. I want.” (Or, to be precise, “I wiiiiiiiish. I waaaaant.” Melismas were the order of the day.) 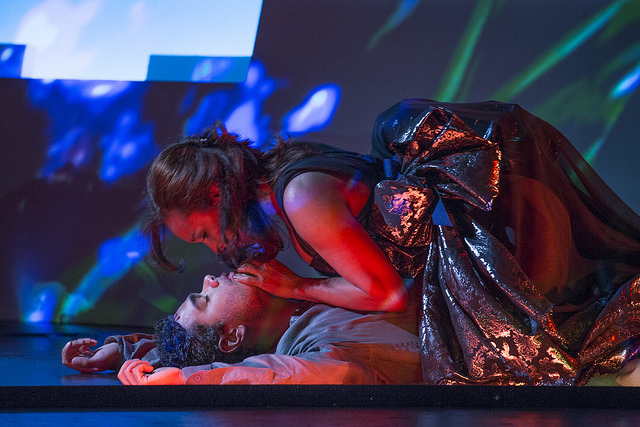 Elliot Madore and Marisol Montalvo in Tree of Codes. Photo by William Struhs.

A mute character dubbed The Dreamer (costume designer Walter Dundervill) placed props, occasionally dressed or undressed the singers and pulled them around on wheeled platforms meant to lend mysterious grace to their movements. Dundervill retained a stone-faced dignity even as Son ranted in Russian (or was it Esperanto?), which suggested he wisely wasn’t paying attention.

Plus, read more dispatches from this year’s festival.
Tweet