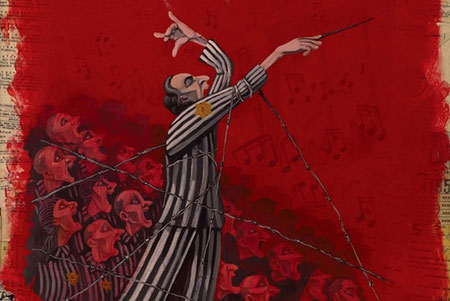 As a Holocaust historian and educator, I am often asked, “Why did no one resist?” Fortunately, there was considerable resistance, from many quarters and in many forms. This becomes more visible when we break free from narrow definitions of “resistance” —that is, the notion that only armed struggle qualifies as resistance.

The Nazis used their infamous camp Theresienstadt (also known as Terezín), forty miles north of Prague, as a “model” camp that they claimed was humane, a ruse that some outsiders accepted. As part of this charade, the Nazis transported large numbers of artists and musicians to the camp.

In 1941 Rafael Schächter, a young Czech conductor, was arrested and sent to Terezín. He managed to recruit 150 prisoners and teach them Verdi’s Requiem under near-impossible conditions: learning by rote in a dank cellar using a single score, and holding semi-clandestine rehearsals after long days of forced labor. They performed the piece on sixteen occasions for fellow prisoners—the final time, in June 1944, before an audience of SS officers from Berlin and officials of the International Red Cross. 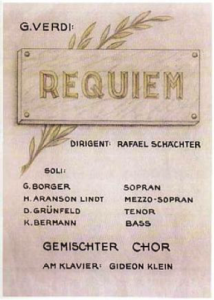 Schachter collaborated with the famed pianist and composer Gideon Klein, among others. Klein would also perish during the Holocaust.

Murry Sidlin came upon this story by chance browsing through a book in a Minneapolis bookstore. Sidlin alighted upon a brief reference to the Requiem performances in Theresienstadt and began to question the possibility of such a performance given the circumstances.

Sidlin, whose paternal grandmother and her family were killed in a Latvian ghetto, began to decode the connection between their resistance and the Verdi text. He contacted survivors, as the Defiant Requiem Foundation’s site explains, and the story began to unfold:

“I could see that almost every line of the Mass could have a different meaning as a prisoner,” detected Sidlin. ‘Deliver me O Lord’ for them meant liberation. Nothing remaining unavenged was certainty of punishment for their captors….”

When Sidlin interviewed the survivors, his intuition was confirmed about why they were drawn to the work:

“Schächter told his chorus: ‘We can sing to the Nazis what we cannot say to them’—that was the essence, that was the message behind the Verdi.”

UNC Charlotte’s School of Music and the university’s Center for Holocaust, Genocide & Human Rights Studies will host two events that highlight this striking and powerful form of defiance to Nazism.

On November 16, the School of Music and the Holocaust-studies center will show a documentary film, Defiant Requiem, at UNCC’s Center City location. The 80-minute film employs testimony provided by surviving members of Schächter’s choir. The film explores the singers’ view of the Verdi as a work of defiance and resistance against the Nazis.

Susan Cernyak-Spatz, who survived Theresienstadt as well as Auschwitz, and knew artists in Theresienstadt, will speak at the November 16th event. More than once in the last year, Susan has expressed her concern over the rise of nationalism and fascism, which “remind [her] of things [she] saw in Berlin and Vienna” in her youth. 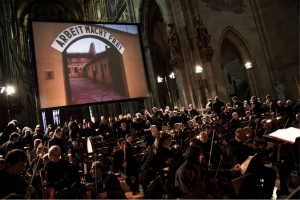 The second event will be a concert entitled, “Defiant Requiem: Verdi at Terezín.” Conductor Murry Sidlin created the concert/drama to tell the story of the Requiem at Terezín. This multi-media production will be performed on December 3rd at UNCC’s Robinson Hall.

In creating the concert Sidlin has said, “my own objectives were simple: I am attempting to give Schächter the career he was prevented from having; and I want everyone who learns of the commitment to the ‘high ground’ taken by the conductor and chorus to associate them always with the Verdi score.”

John Cox is associate professor of Global Studies at UNC-Charlotte, where he directs the Center for Holocaust, Genocide & Human Rights Studies.