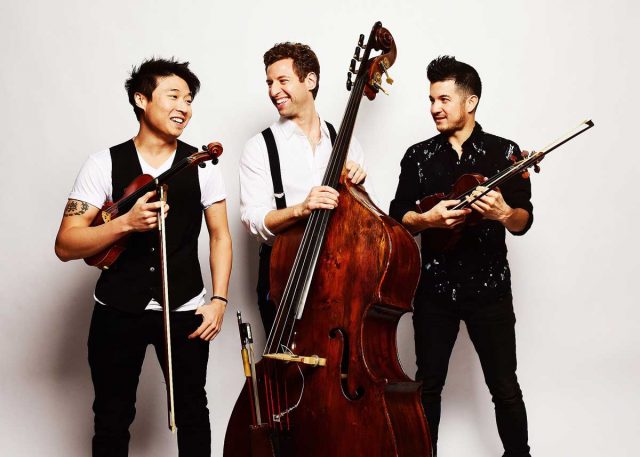 September 20, 2017Amanda PrestonNews & Features, UncategorizedComments Off on Q & A: Music starts from silence

I first heard of Time for Three a few years back, constantly finding myself stumbling on their music and collaborations. As a violist, string players who are innovating have always been exciting for me. The group performed on PBS with the Indianapolis Symphony and I found my jaw on the floor more than once.

All the members of Time for Three are classically trained. Violinist Nicolas “Nick” Kendall and double-bassist Ranaan Meyer met at the Curtis Institute of Music in Philadelphia, and violinist Charles Yang is a Julliard graduate.

When I heard that they were headed to Davidson to perform with the Davidson College Symphony Orchestra (DCSO) as part of the C. Shaw Smith Artists Series, I was thrilled that the students at Davidson College would get the chance to work with such vibrant musicians.

Late one afternoon, slightly before catching a train, Nick Kendall, of the energetic string group, took a moment to talk to me about music, creativity, and life.

Could you give us a sense of how your classical training has affected your work with Time for Three? From performing to composing/arranging to improvisation, how has it shaped your music making?

Each one of us has a similar background in how we came to music from a very early age. All three of us learned through the core classical canon, but each of us had a natural desire to make music for people walking on the street and people who maybe wouldn’t listen to the same kind of music that we were learning. We wanted to connect with them in some way musically, and that often meant a lot of improvisation, playing in bands, etc. It took a lot of effort and challenge to learn these great classical masterworks, but at the same time, it was amazing to have other musical experiences as kids that were so “in the moment.” It wasn’t until later in life that those two worlds fused together and didn’t need to be separated. And that’s at the center of Time for Three. 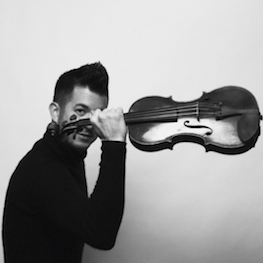 “Classical Crossover” is starting to gain some footing in the performance world in Charlotte. Last season, Steve Hackman led the Brahms vs. Radiohead program on the Charlotte Symphony’s Altsounds series, and this year Mark O’Connor is the Charlotte Symphony’s first Artist-in-Residence. Why do you think it’s important for people to be exposed to the “crossover” work you guys are doing?

I think if you talk to any of us who are interested in this new area of music, the word “crossover” is kind of nasty word. I think it’s a term that brings a lot of clarity to what the actual “genre” might be, but in a lot of ways, the music is genre-less. It’s this rich, experimental area. There are a whole slew of young artists who share something in common: the way we make music starts from silence. Silence is our canvas. After that, it’s creating experiences where there may be familiar things you can hang your hat on, but also an expectation that you go on a bit of journey, a place where you learn. There’s such a world that’s open to that. With the ability for people to curate their own content online, this allows for artists not to be confined to genres but to exist in their own way with whatever they want to do.

A lot of your work is very genre-bending and far beyond just a merge of classical and pop. Do you just follow your ear and make music that’s interesting to you, or do you take another approach?

For Time for Three, it’s evolving in a very exciting way. Before Charles, we were definitely a group that spent a lot of time building these compositions that took the familiar and fused it with core repertoire from classical music that we love. It’s kind of like we show up at the bar or something and are telling people how awesome Brahms is, and the emotional reason why the horns go through those juicy chord progressions, playing that music is just sick! There’s nothing like it out there. We spent a lot of time doing that, but now with Charles, we’re adding another component to our group: singing. Besides being an amazing violinist, Charles is an amazing singer. Ranaan and I sung in choir before and have had ear training, but we didn’t realize we actually had voices. We’re adding to our sound now, and with that, we’re head on into writing original songs. We’ll be playing a lot of new stuff on the road; none of the new material is released except for our live shows. We’re kind of shifting from being a mash-up band to a more original band moving forward.

What makes you the most excited about working with young orchestras, like your upcoming performance with the Davidson College Symphony Orchestra?

Each one of us has been through so much, so many challenges, but the reward is that we keep learning and are open to new experiences. Whenever we have the opportunity to inspire or encourage younger musicians to work hard and to continue working to find their expressive path, we take that platform very seriously. It’s kind of like we’re all on this one big train, and Time for Three is just a couple cars ahead looking back at all the younger people and saying “keep working hard because it’s really awesome up front.” We do our thing, but that’s not to say that people should play or do exactly what we do. But all the ingredients that go into how we found our thing are things that people can understand. That means intense work at your craft and perspective on yourself as a person. There’s nothing worse than an artist that takes [himself or herself] way too seriously and doesn’t know how to live. And honestly, when you work with younger orchestra, sometimes the end result is so much more exciting and memorable experience for everybody than with a professional group because everybody’s putting so much into it. And for us, that’s something we really look forward to…that’s irreplaceable.

As you know, most young classical musicians are taught to play the notes on the music and not encouraged to improvise and explore their instrument and creativity in a new way. What advice would you give young musicians or those who are new to improvisation to help them get started?

Improvisation is a tool, not a result. It’s a tool you use to say something. We believe very strongly that when you’re playing core repertoire, there’s an element of improvisation that needs to be applied because you’re flexing in the moment. The more reactionary you are, it becomes alive. There’s nothing worse than playing a masterwork straight down the line, and in tempo, one tempo only, it’s just boring. The best is when it comes alive. But it can also be used when you’re just making things up on the spot. It’s also important to remember that if you know how to communicate as a human being, you are improvising all the time. Every human being has the capacity to improvise, the only difference between speaking and improvising and playing on your instrument is that you’re speaking more than you’re playing. So all you have to do is practice. You have to practice improvising. You practice knowing the tools of your instrument to be the conduit for being expressive in your own way.

If you played a different instrument than you do now, what would it be and why?

Kazoo! No, I’m just kidding. I love the viola; I was just speaking to one of my best friends who is an amazing violist and we both agreed that the viola is just such a warm instrument, that tenor voice. It’s also, when you’re playing in an ensemble, the tenor line…you actually have lot of control, a lot of people don’t realize this. You have so much inner voicing — the gears of a work are so much in the hands of the violist. We’ve actually been talking about adding the viola to part of our sound in Time for Three. We’re working on a future where Charles and I both switch between violin and viola. The viola is awesome.

I’ve also always been attracted to drumming. I used to be a part of a bucket band when I was a teenager. My mom is from Japan, and the traditional Taiko drumming was something I experienced as a very young child. The rhythm of life, the heartbeat of the world…. I think rhythm has always drawn me in.

If you’re interested in learning more about Time for Three, visit their website or consider supporting the group and the Davidson College Symphony Orchestra by attending their performance on September 23rd, 2017 at Davidson College.

Amanda Preston is the Marketing Manager at WDAV. In addition to her marketing responsibilities, she also manages WDAV’s Young Chamber Musicians Competition and works on community outreach for the station. Amanda is a Davidson alumna, a graduate student at UNC-Charlotte, and plays viola in the Davidson College Symphony Orchestra.