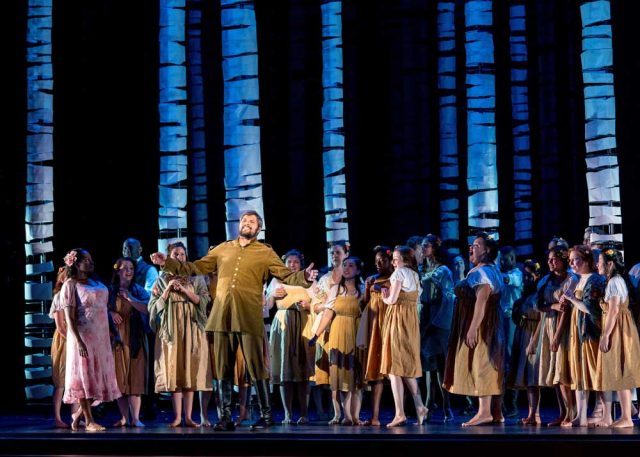 Several of the people from the Spoleto Festival USA I’ve interviewed for this series have expressed the same idea: that attending these varied events in close proximity to each other gives you an enhanced appreciation for each event that you might not have otherwise. As the end of my latest visit to the festival draws near, I can heartily confirm that’s true. 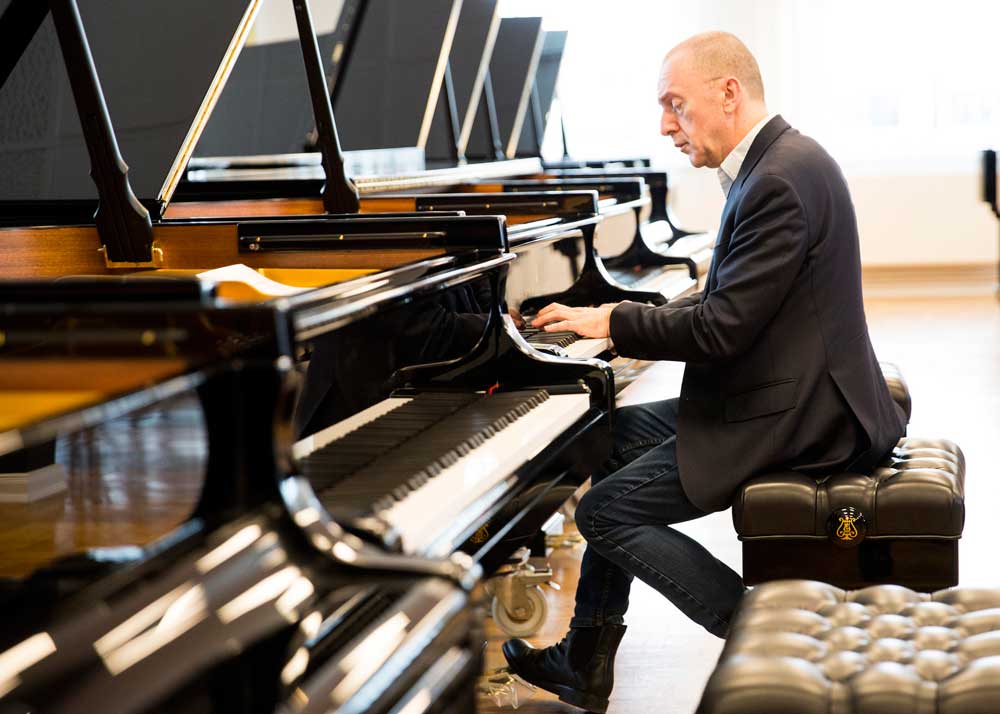 Pianist Pedja Muzijevic plays one of the pianos in the Hamburg Steinway & Sons showrooms in Germany. Photo by Christina Czybik.

Some of the concerts I’ve attended have distilled that concept to its most basic. For example, the Dialogues recital given by the brilliant pianist Pedja Muzejevich as part of the Music in Time series. He gave a performance at the Simons Center Recital Hall at the College of Charleston that juxtaposed the familiar language of Haydn piano sonatas with much more unusual works, such as John Cage’s Bacchanal for Prepared Piano, which at times makes the piano sound like a rhythmic machine, and in slower passages like an exotic Asian instrument. Having that type of sound experience gives you fresh perspective on how Haydn sounds now, and how his music might have sounded when it was first heard.

Other combinations aren’t as stark in contrast, but just as meaningful. My favorite was the coupling of two works for chorus and orchestra by Ralph Vaughan Williams in one part of a concert, with the Mozart Great Mass in the other. Comparing Mozart’s stately yet profound religious expression with the lush and rapturous writing of Vaughan Williams made the qualities of each composer’s work stand out all the more. Of course, I would have enjoyed that program in any event since it featured one of my all-time favorite pieces. The Serenade to Music by Vaughan Williams featured exquisite solo violin work by the uncredited concertmaster, as well as beautiful vocal solos from soprano Sherezade Panthaki and tenor Jamez McCorkle (who also stood out during this festival for his moving rendition of Lensky’s aria in Tchaikovsky’s opera Eugene Onegin). 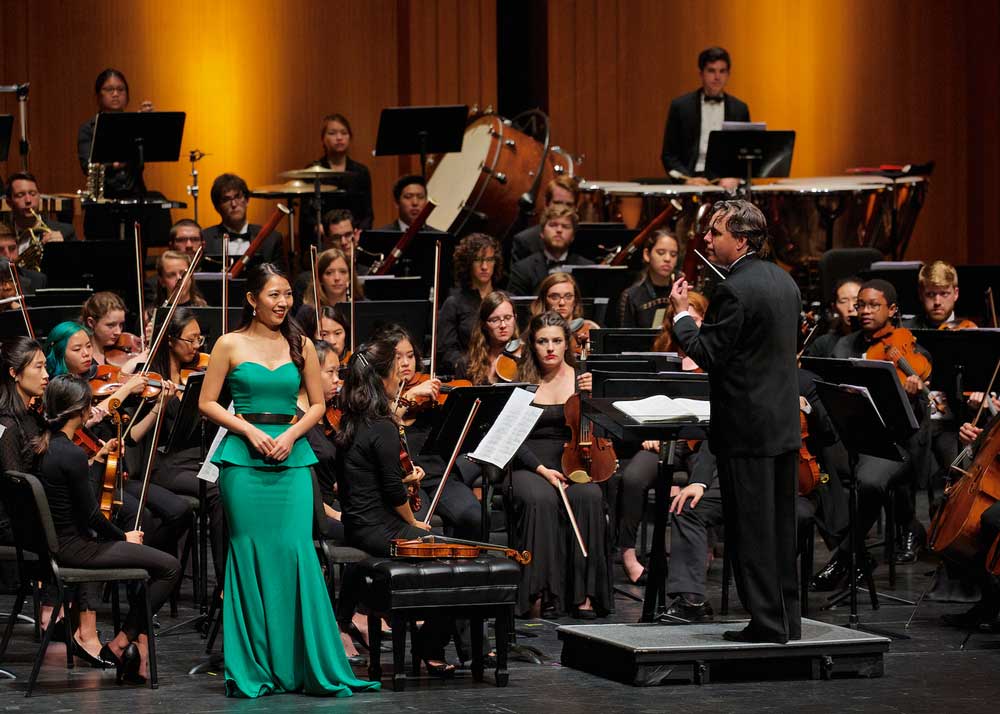 The pairing of Mahler’s 4th Symphony with a contemporary orchestral piece was another concert program which worked wonderfully well. Anna Thorvaldsdottir’s atmospheric Dreaming (with its rumblings, chirps, groans, cracks and other sonic effects) brought to my mind images of great whales swimming in frozen seas, and majestic glaciers drifting in icy flows. Its introspective quality was offset nicely by the exuberant Mahler, which under John Kennedy’s direction was everything music by that composer can be. Imaginative, quirky, mercurial and sublime, the score frequently built to spine-tingling explosions of orchestral color perfectly modulated by the Spoleto Festival USA orchestra. 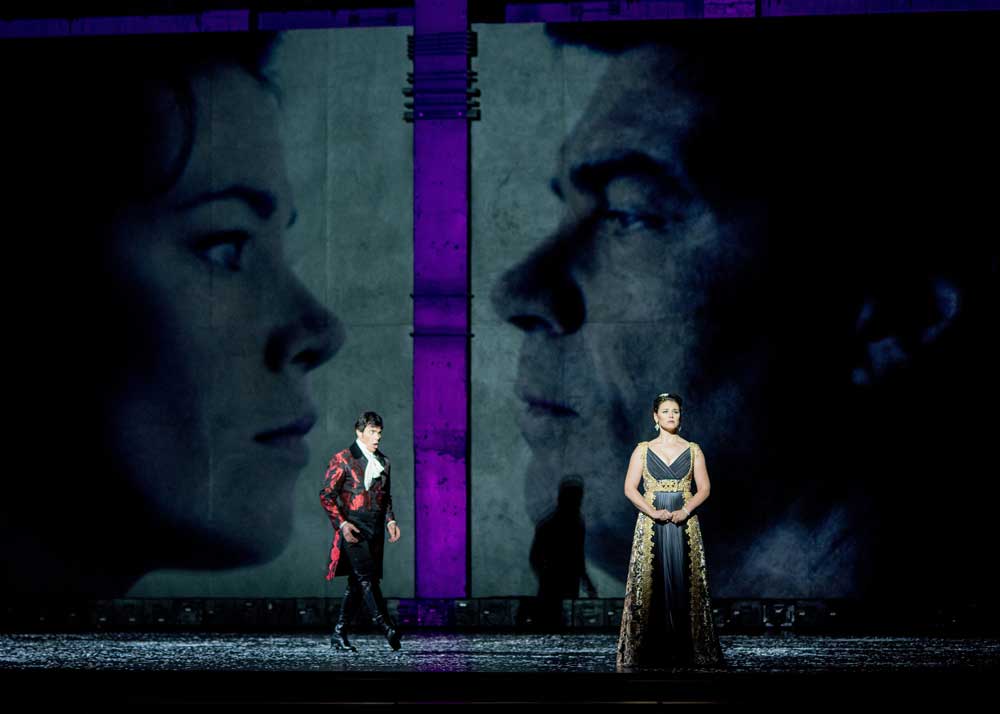 Similarly, the contrast between the three opera productions made each more memorable. After the mannered Baroque approach of Vivaldi’s Farnace, and the austere modernity of Quartett by Luca Francesconi, Tchaikovsky’s Eugene Onegin seemed the pinnacle of lush Romanticism. It was also distinguished by the cinematic staging of director Chen Shi-Zheng, which used projected film of the striking soprano Natalia Pavlova (in close-up as well as silhouette) to take us into the inner life of her character, Tatyana. 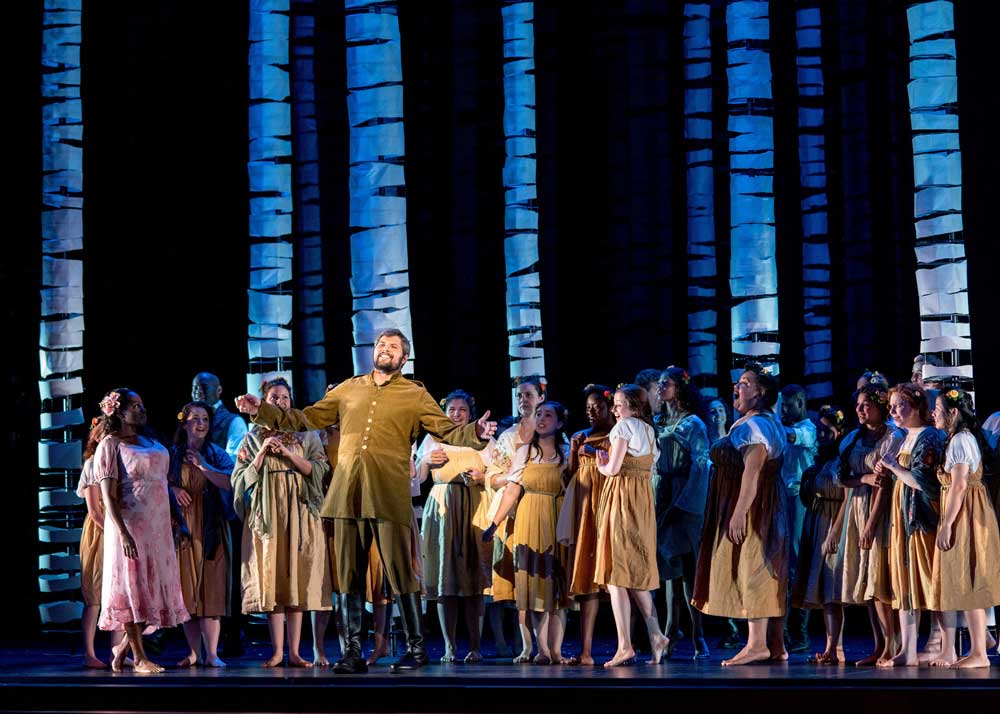 I also admired the forest of stylized birch trees that formed the main feature of the set (though they did cramp the choreography a bit in the ball scene that features some of Tchaikovsky’s most familiar opera music, the famous waltz and polonaise from the score which have become concert staples). The staging of Lensky’s aria was stunningly beautiful yet simple: the stage stripped bare all the way back to the walls of the backstage area, with both real and projected snowflakes swirling against the black background conveying Lensky’s desolation as he awaits the duel which he may not survive. 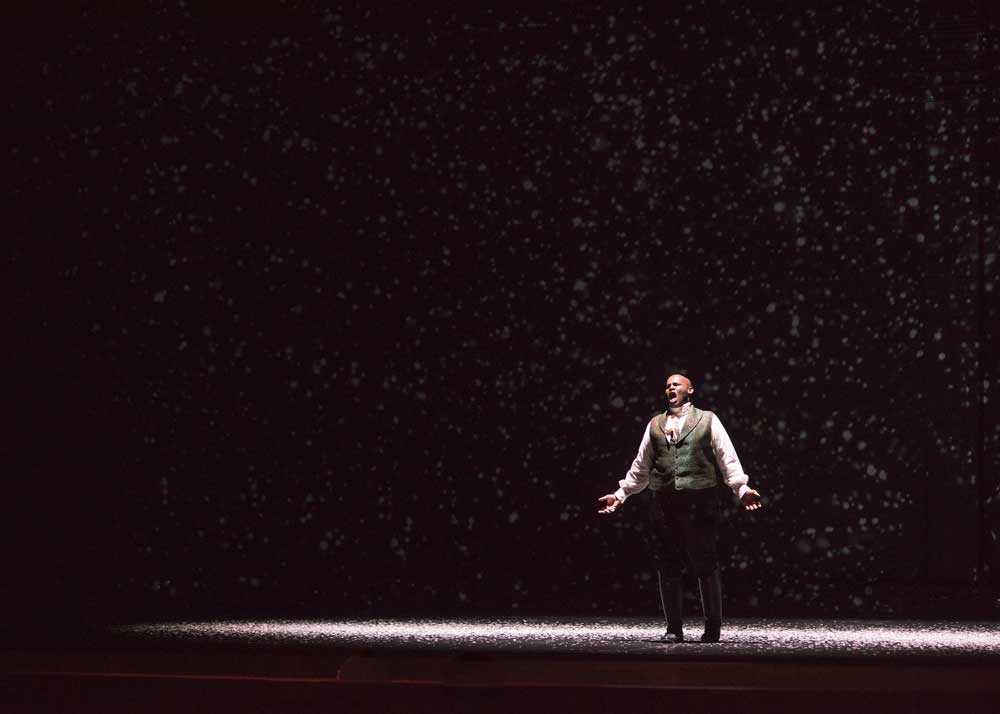 Despite the embarrassment of artistic riches I’ve enjoyed over the past couple of weeks, there’s so much I didn’t have a chance to catch, so I guess a return visit for a future season is in order. After this experience, I certainly won’t hesitate to come back.