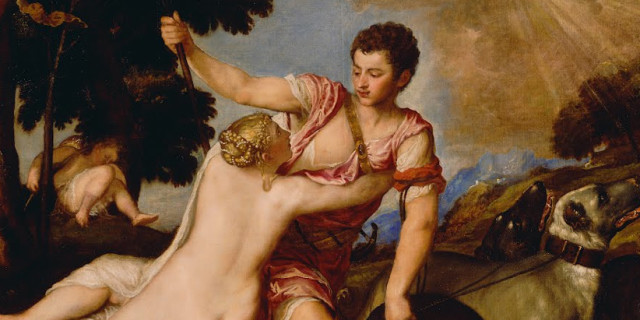 One myth. Three stories. See how William Shakespeare, John Blow, and Henry Desmaret told the story  — very differently — of Venus and Adonis through their poetry and operas. Whether driven by political commentary or personal turmoil, these men’s versions of Ovid’s myth reveal may reveal more about themselves than about their source material.

The Myth: Venus and Adonis

These two lovers’ affair first appeared in book ten of Ovid’s Metamorphoses, but the more well-known version of their story actually comes from the Shakespearian poem Venus and Adonis. In Ovid’s original, Venus has fallen in love with Adonis, having been struck accidentally by one of her son Cupid’s arrows. She walks about with him while he hunts in the forest and then she tells him a story. Venus leaves; Adonis goes back to hunting and is tragically killed by a wild boar. Venus in her mourning turns Adonis into the flower Anemone.

Shakespeare takes great liberties with these mere 75 lines of Ovid’s poem and turns Adonis into a prudent youth who desires hunting above love (read his poem: Venus and Adonis). This is the Adonis that we usually think of in the myth. He shuns Venus’ aggressive advances and joins the hunt, ignoring her warnings of the dangers of boar hunting. Adonis meets the same end as the original and Venus declares that love will thereafter be attended by sorrows.

The version of Venus and Adonis told in John Blow’s opera of the same name brings yet another tweak to Adonis’ character, but this time the change contains a moralizing motivation. This earliest-surviving English opera was performed privately for the court of King Charles II. The special casting under these conditions, combined with the diversions from the original myth, suggest that Blow wrote his Venus and Adonis as a commentary on court culture. Blow’s Adonis is not a resistant adolescent but a frustrated lover teased by Venus, who is played by the King’s former mistress. At the sound of the call to hunt, Venus urges Adonis to go, knowing absence from her will kindle new desire. Adonis on the other hand vows never to leave her, yet is unable to resist the challenge when the huntsmen burst in describing the boar. Any question of which role represents the King is done away with when you consider that Cupid, Venus’ son, is played by his illegitimate daughter Lady Mary Tudor. Thus Blow’s impetuous versions of Venus and Adonis, become a metaphor for loose sexual mores of the King’s court and a satire on their heedless behavior.

Desmaret’s tale of Venus and Adonis from 1697 is radically different than Blow’s earlier opera and from Ovid’s original. The only consistencies are Venus’ love for the irresistible Adonis and his tragic death by a wild boar.

In this version, Venus has come down to declare Adonis king of Cyprus. She confesses her love for Adonis to Cidippe, a new character, who is also secretly in love with Adonis. Desmaret also brings in the figure of Venus’ other lover, Mars. Mars learns through Cidippe of Venus’ new lover, and together the jealous Cidippe and Mars plan their revenge on the couple. After various other schemes, Mars solicits Diana’s help in punishing Adonis. She unleashes a wild boar that wrecks havoc on the people of Cyprus. As the new King, Adonis sets out to slay the monster and save his people. He is victorious, but Diana brings the beast back to life and Adonis is killed.

Desmaret composed Vénus et Adonis in the middle of his own dramatic love affair, one with the teenage daughter of a high official that resulted in his exile to Brussels. It has been suggested that some of the emotion of the drama in Desmaret’s life can be felt in the emotion of the composition.