Ludwig van Beethoven represented the bridge between the Classical and Romantic eras in Western classical music, but many might not know how his  life and experiences influenced his compositions.

The German composer was born in Bonn in 1770. His father served as his first music teacher and — as legend has it — he was a very strict teacher. Johann van Beethoven supposedly forced his children to stand at the piano even if they cried in protest. This is, many believe, merely legend, but nevertheless Beethoven’s musical talent became obvious during his lessons. He would perform his first public performance at the age of seven, and soon Beethoven was performing regularly as his family depended on the money he was awarded by local aristocrats. 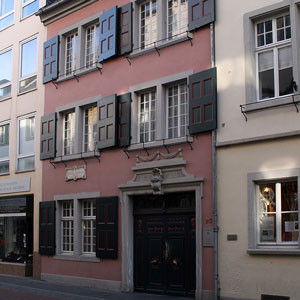 Beethoven’s house of birth in Bonn, Germany. It now serves as the Beethoven House Museum.

As a young man, Beethoven became widely known as Mozart’s successor. Beethoven knew this, and he began to study Mozart’s work intensely and composed works with the great composer as his influence. Beethoven soon left Bonn for Vienna amid fears of war spreading from France in late 1792. Once in Vienna, he steadily established his career as a performer and composer. He became known for his improvisations while playing in the homes of the Austrian nobility and was celebrated as a piano virtuoso.

By the age of 26, Beethoven’s deafness became an ever-problematic aspect of the composer’s life.  He did not completely lose his hearing until later, and he acknowledged his condition in the infamous “Heiligenstadt Testament.” This letter, addressed to his brothers, recorded his thoughts of suicide due to his escalating deafness. He wrote, however, that he would continue his life for the sole purpose of his music.

The end of Beethoven’s life became a struggle not only because of his increasing deafness as he began to decline in several ways. His health was deteriorating, his brother Carl became ill and passed away, and finally his struggle to gain custody of his brother’s son became a large emotional and monetary investment. Beethoven considered his brother’s wife, Johanna, an unfit guardian and pursued custody of the child. This battle dragged on and took financial and emotional tolls on the composer for most of the later stages of his life until his death. Beethoven’s life provides a glimpse into the emotion and passion behind his musical compositions.