From Argentina to France to Romania, here are some of the most remarkable concert halls around the world. Which halls would you add to this list?

Concert Hall: Palau de Música Catalan in Barcelona, Spain
What Makes It Unique: The Palau de Música is the only hall in Europe illuminated entirely by natural light in the daytime. Look up and you’ll see how it’s done—a magnificent inverted dome of blue and gold stained glass.
Significant Performances: Manual de Falla’s Concerto for Harpshicord and Five Instruments was performed for the first time in this venue.

Concert Hall: Konzerthaus Berlin, Berlin Germany
What Makes It Special: The Konzerhaus takes center stage in Gedarmenmarkt Square, where stands between the German Cathedral and the French Cathedral.  Its neoclassical architecture is only enhanced by the symmetry of the square as a whole.
Significant Performances: Beethoven’s famous Symphony No. 9 premiered in this Konzerthaus.

Concert Hall: Teatro Alla Scala in Milan, Italy
What Makes It Unique: No list of world-famous concert halls would be complete without world-famous Teatro Alla Scala, constructed in 1778. La Scala was originally lit with thousands of oil lamps. To avoid fire, several rooms were kept full of water buckets. La Scala has thankfully upgraded to electricity since then, but its fame has continued unchanged since its construction.
Significant Performances: La Scala’s list of premieres is packed with well known’s, including Verdi’s Falstaff and Puccini’s Madama Butterfly

Concert Hall: El Teatro Colón in Buenos Aires, Argentina
What Makes It Special: El Teatro Colón went through three architects during its construction—one having passed away and another murdered before its completion. Despite these initial complications, the theater is considered acoustically one of the five best concert venues in the world, providing a perfect listening experience even on the seventh floor.
Significant Performances: After a $100-millon five-year renovation, El Teatro reopened in 2010 with a performance of Tchaikovsky’s Swan Lake and Puccini’s La Bohème.

Concert Hall: Mariinsky Theater in Saint Petersburg, Russia
What Makes It Unique: The Mariinsky Theater has served as the principal venue of the Imperial Opera since the second half of the 19th century. The state recently completed the construction of a second facility. Located across the way, Mariinsky II is designed to integrate contemporary works with the Mariinsky’s rich tradition of classical Russian ballet and opera.
Significant Performances: Tchaikovsky’s The Queen of Spades, and Marius Petipa choreography of The Sleeping Beauty, Swan Lake, and The Nutcracker all premiered here.

Concert Hall: Wiener Musikverein in Vienna, Austria
What Makes It Unique: The Musikverein’s Großersaal, or main concert hall, is said to bring architecture and ornamentation together so well, that it not only enhances the music, it is music itself. Notice the rhythm of color and form on the ceiling and walls.
Significant Performances:  Among the Musikverein’s line of concert directors are Ferdinand Löwe, Hans Richter, and Johannes Brahms. 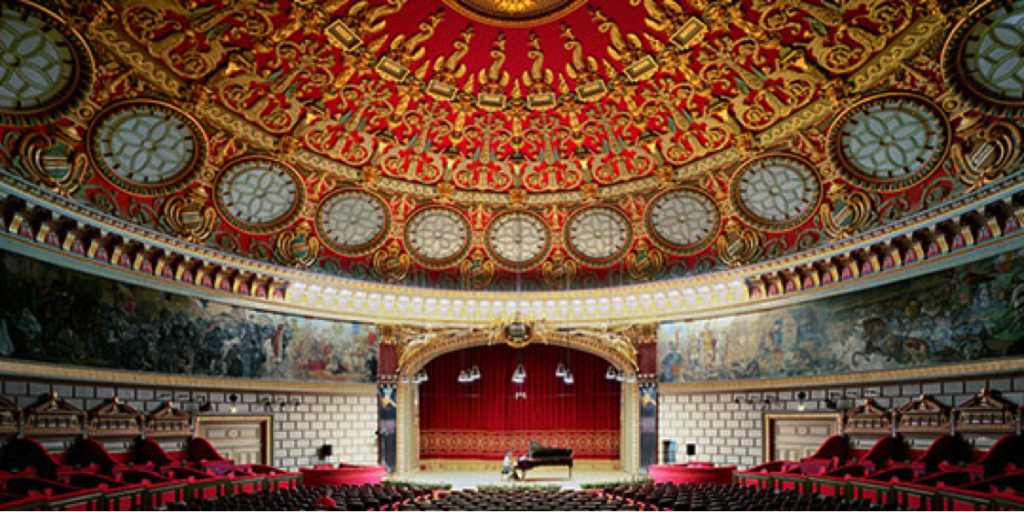 The Romanian Athenaeum, in Bucharest, Romania

Concert Hall: The Romanian Athenaeum, in Bucharest, Romania
What Makes It Unique: Erected as a building dedicated to the arts and sciences, the Athenaeum is considered the symbol of Romanian culture. Its connection to its people can be seen not only in the monumental fresco that commemorates the history of Romania, but in the fact that its construction was funded largely by public donations!
Significant Performances: Romanian composer George Enescu conducted the premiere of his enthusiastically acclaimed “Romanian Poem” here on March 1st, 1898.

Concert Hall: Palais Garnier in Paris, France
What Makes It Unique: The opulently decorated Palais Garnier is easily one of the most well known operas, often referred to as simply, the Opéra. The building itself puts on a performance—you’ll encounter spectacles of the foyers, rotunda, and the famous grand staircase before even reaching the auditorium.
Significant Performances: Verdi’s Otello was first seen in France here in 1894. The Palais also hosted the 1000th performance of Goethe’s Faust that same year.