POSTED August 8, 2011 — The National Flute Association hosts its 39th Annual Convention in Charlotte, August 11–14, 2011, at the Charlotte Convention Center and the Belk Theater at the Blumenthal Performing Arts Center. The public is invited to attend the concerts and workshops Thursday through Sunday – and to visit the largest flute trade show in the world.

This year’s convention theme is “Unity Through Diversity:  Many Flutists, One World,” reflecting the NFA’s support of all flutists, from students to teachers, beginners to professionals, amateurs to concert soloists. Expect performances and workshops by many of the best-known artists and rising stars from around the world. Headliners include Paula Robison, Carol Wincenc, Bradley Garner, and Jill Felber from the United States, GuoLiang Han of China, Trevor Wye of England, Maxim Rubtsov of Russia, Swedish flutist Göran Marcusson, and Alexa Still from New Zealand.

Gala concerts are open to the public on Thursday, Friday, and Saturday nights at 8:00pm at the Belk Theater. 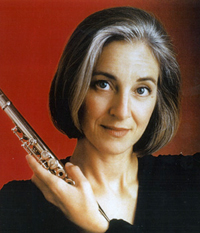 Carol Wincenc and Trevor Wye will receive the NFA’s highest honor, the Lifetime Achievement Award, and Katherine Borst Jones will be presented with the association’s National Service Award. Carol Wincenc is one of today”s international stars of the flute, appearing as soloist with major orchestras around the world and in great demand as a chamber musician and teacher. Frank Dominguez chats with Carol about her career and this award on Saturday, August 13 at 11:30 AM on wdav.org and WDAV 89.9FM.

Trevor Wye has authored a long and distinguished list of publications, including the widely used Practice Books for the Flute, and flutists come from all corners of the globe to study with him. Katherine Borst Jones has served the NFA in every conceivable capacity, including twice as President and as Program Chair for the 1992 convention. There will also be special tributes to several North Carolina musicians who have made significant contributions to the flute, including Mark Thomas, who co-founded the NFA and is celebrating his 80th birthday.

Local flutists ages 8–13 should take advantage of the NFA’s “Youth Flute Day” on Saturday, August 13, from 8:30am to 5 pm.  For a special one-day rate of $50 per youth and $25 per accompanying adult, young flutists have a full day of programming designed for them, including flute choir rehearsals, youth recitals with jazz flutist Zachary Kellogg and classical soloist Emma Resmini, a masterclass with Paul Edmund-Davies, tours through the exhibit hall, and breakout sessions with renowned flutists.

Visit the for a complete listing of convention events. Individual tickets for all events range from $10 to $30 and are available at the registration desk at the Convention Center during the convention. Tickets for the evening gala concerts are $30 or $20 for students and will also be sold at the Belk Theater Box Office. For more information, call 661-250-8920 until August 10 or 704-339-6000 during the convention.

About the National Flute Association
The National Flute Association is a not-for-profit corporation founded in 1973 and is the largest flute organization in the world. The NFA has approximately 6,000 members from all 50 states and 50 countries. Its outreach activities to date include commissioning more than 70 works for flute, scholarships, publication of The Flutist Quarterly, and the largest lending library of flute music in the world. Membership in the NFA and attendance at the convention is open to all flutists and flute enthusiasts.