POSTED May 26, 2011 – Davidson, NC — The Davidson College Board of Trustees today elected Carol Quillen, vice president for international and interdisciplinary initiatives at Rice University, the 18th president of Davidson College. Her appointment is effective August 1, 2011. 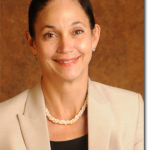 Quillen’s appointment was announced at an all-campus meeting this afternoon. In making the announcement, Davidson’s Board chair, Mackey McDonald ’68, said, “The Davidson search committee was a microcosm of the Davidson family—trustees, students, faculty and staff with a broad range of interests, experiences and backgrounds. Even with the great diversity on the committee, there was a deep, shared commitment to Davidson—and an absolute agreement about our new president. Carol Quillen understands all facets of the academic enterprise,” McDonald noted. “A brilliant administrator and a talented teacher and scholar, she can articulate not only the value, but also the necessity of a liberal arts education. Her values are Davidson’s values. She inspired us,” McDonald said, “and we could not be more enthusiastic about welcoming her to Davidson.”

Quillen has had a long and distinguished career at Rice. She joined the faculty as an assistant professor of history in 1990, and she earned promotion to associate professor in 1996. From 2004 to 2008, she served as the first director of Rice’s Boniuk Center for the Study and Advancement of Religious Tolerance, leading development of the center’s new mission and shaping an agenda that helped distinguish the center from other organizations.

From 2006 to 2010, Quillen served as Rice’s vice provost for academic affairs, focusing particularly on developing initiatives that cross academic schools, faculty diversity and faculty development, and resource development. During this time, she worked with faculty to develop and secure funding for a new Center for Asian Studies and a new Institute for Urban Research. She co-chaired the president’s diversity task force, and instituted mentoring programs for junior faculty.

In her current role, as vice president for international and interdisciplinary initiatives, Quillen is responsible for developing and implementing Rice’s overall global strategy, which includes research partnerships, recruiting strategies, curricular revision and international opportunities for students. She also facilitates implementation of university-wide initiatives, including the Institute for Urban Research, Rice 360 (a global health effort), and collaborations with Baylor and other institutions within the Texas Medical Center. She works closely with the president, provost and other senior leadership on academic, budget, curricular and capital projects planning.

James W. Crownover, chair of Rice University’s Board of Trustees, said, “It’s an honor for Rice that one of ours has been chosen to lead a place as respected as Davidson. I’ve worked very closely over the years with Carol Quillen-she’s a strategic thinker and an outstanding collaborator. It’s easy to see how smart and inspiring she is; what’s harder to see, but what’s also true, is that she’s very hard-working. She has a commitment to doing things well, and to helping those around her do well, too. She will work hard, and she will succeed for Davidson.”

Quillen grew up in New Castle, Del., a small town where she says “it was second nature to support the community and look out for other people.” A Presbyterian, she attended Quaker schools from pre-kindergarten through high school. She earned a B.A. degree in American history from the University of Chicago, graduating Phi Beta Kappa with special and general honors, then received a Ph.D. degree in European history from Princeton. A humanist whose academic interests include early modern European history, European intellectual history and gender studies, Quillen has written two books on Petrarch, as well as a number of scholarly articles, reviews and papers. She has received a number of teaching awards during her tenure at Rice, and also has received grants and fellowships from the Social Science Research Council, the Whiting Foundation, the Fulbright Foundation and the Harvard University Center for Renaissance Studies, among others.

Quillen’s daughter, Caitlin, will be a first-year student at the University of North Carolina next fall. Quillen’s husband, Ken Kennedy-a computer pioneer who founded the computer science program at Rice—died of pancreatic cancer in 2007. “His greatest gift to me, and to the Rice community, was in living the life he would have chosen,” Quillen said. “That’s something I think about in a very profound way every day.”

At Davidson, Quillen succeeds Tom Ross ’72, who announced in August 2010 that he would step down to become president of the University of North Carolina system in January 2011.

Davidson’s presidential search began in October 2010, when the Board of Trustees appointed an 19-member search committee that was chaired by Kristin Hills Bradberry ’85. Made up of trustees, students, faculty, parents and staff, the committee “demonstrated an untiring commitment to Davidson College,” said McDonald at today’s all-campus meeting. “The search process was inclusive and informative, and the entire Board of Trustees is enthusiastic about the outcome. This committee has served Davidson College well.”

About Davidson College
Davidson is a highly selective independent liberal arts college for 1,900 students located 20 minutes north of Charlotte in Davidson, N.C. Since its establishment in 1837 by Presbyterians, the college has graduated 23 Rhodes Scholars and is consistently regarded as one of the top liberal arts colleges in the country. Through The Davidson Trust, the college became the first liberal arts institution in the nation to replace loans with grants in all financial aid packages, giving all students the opportunity to graduate debt-free. Davidson competes in NCAA athletics at the Division I level, and a longstanding Honor Code is central to student life at the college.

About Rice University
Located on a 285-acre forested campus in Houston, Texas, Rice University is consistently ranked among the nation’s top 20 universities by U.S. News & World Report. Rice has highly respected schools of Architecture, Business, Continuing Studies, Engineering, Humanities, Music, Natural Sciences and Social Sciences and is known for its “unconventional wisdom.” With 3,485 undergraduates and 2,275 graduate students, Rice’s undergraduate student-to-faculty ratio is less than 6-to-1. Its residential college system builds close-knit communities and lifelong friendships, just one reason why Rice has been ranked No. 1 for best quality of life multiple times by the Princeton Review and No. 4 for “best value” among private universities by Kiplinger’s Personal Finance. To read “What they’re saying about Rice,” go to http://futureowls.rice.edu/images/futureowls/Rice_Brag_Sheet.pdf.