Pity poor Beethoven. Because of WDAV’s traditional December focus on holiday music, the great master’s December 16th birth anniversary has usually been overlooked. But not this year! 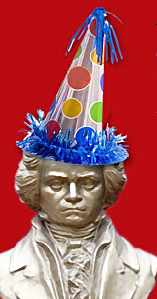 B24 – the Beethoven Birthday Marathon on WDAV features a different, complete Beethoven masterpiece every hour between midnight on Thursday, December 16th and midnight December 17th. You’ll hear all nine of Beethoven’s symphonies, his “Emperor” Concerto for Piano and Orchestra, the Violin Concerto, the “Spring” and “Moonlight” Sonatas, the “Grosse Fugue” Quartet, the “Leonore” Overture No. 3 and much more. Perhaps most exciting, WDAV is pleased to present, as our Symphony at Seven, the Charlotte Symphony’s recent performance of the Symphony No. 7, conducted by Christopher Warren-Green, recorded live at Charlotte’s Belk Theater.
There’s no cake or streamers – but there is a 24-hour party for the Birthday Boy! Listen between midnight December 16th and midnight December 17th for B24 – the Beethoven Birthday Marathon on WDAV Classical Public Radio at 89.9 FM and wdav.org. Brought to you by the Charlotte Symphony Orchestra.