The New York Times today reported the death of conductor Charles Mackerras. He was 84.

From the Times:
Charles Mackerras, a conductor who championed the work of Czech composers, especially Janacek, and had associations with many of Britain’s major orchestras and opera houses, died Wednesday night, his management agency said. He was 84.
Mr. Mackerras died of cancer in a London hospital, said the agency, Askonas Holt. 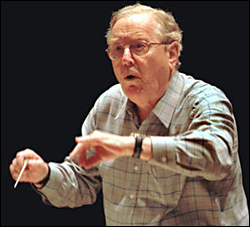 A pioneer in the study of period performance practices, Mr. Mackerras was also known for his renditions of Gluck and Handel operas as well as a broad range of other repertory. He recorded the complete symphonies of Mozart, Brahms and Beethoven and all the operas of Janacek.
Born in Schenectady, N.Y., to Australian parents, Mr. Mackerras was raised in Australia. He played the oboe with the Sydney Symphony Orchestra for several years in the 1940s before going to London to perform with the Sadler’s Wells Opera orchestra and to study conducting.
His major training came with Vaclav Talich at the Prague Academy of Music. Later came conducting posts with Sadler’s Wells, the BBC Symphony Orchestra, the Sydney Symphony, the Welsh National Opera, the Scottish Chamber Orchestra and the Royal Philharmonic Orchestra. He was also music director of the Orchestra of St. Luke’s in New York from 1998 to 2001.
Mr. Mackerras was knighted in 1979. He is survived by his wife, Judy, and daughter, Catherine. Another daughter, Fiona, died several years ago.
For more about the life of Charles Mackerras, read this 2005 profile by The Guardian.