POSTED 8/4/09 ON BEHALF OF JOHN SYME
In my six weeks of drive time across the United States of America this summer, geography was not the only thing I covered. I was all over the musical map, too: rock’n’roll (of course); country (unavoidable, and fine by me—most days); jazz (for short periods); classical (not available in some states); get-it-on blues (void where prohibited); pop (exact definition depends on the town; I heard some fine nouveau-California-pop songs in San Diego that I haven’t heard before or since); and that egregious call-in show with easy-listenin’, lovey-dovey “Delilah” (you can run but you can’t hide). Okay, there was no rap or hip-hop on any of my playlists or stations, so I guess I wasn’t all over the musical map. So sue me. Stuff works my nerves. 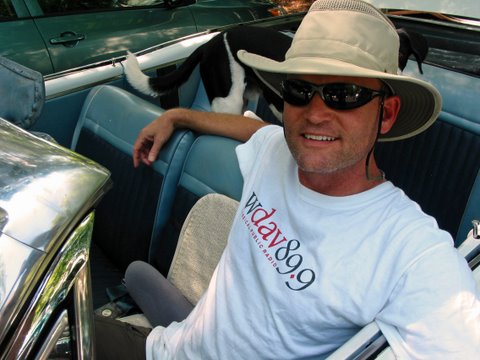 Me, my Tilley hat, my dog Dodger’s hindquarters, in my driveway on our day of departure: June 13, 2009. (Photo credit: The lovely and talented Jennifer Foster ’92, announcer and producer, WDAV 89.9 FM Classical Music Radio, a listener-supported service of Davidson College.)
Anyway, with a total distance traveled topping out over 7,000 miles, the long way out to southern California (Gertrude Stein was right about L.A.) and back again, I also had ample opportunity to employ sundry of our modern music industry’s delivery formats, in addition to making overweening pronouncements on said music’s actual content.
I listened to the radio, I listened to the iPod (on my early-model car’s late-model Pioneer stereo, as well as with personal earbuds doing yoga at the Grand Canyon), and I listened to retro “cassette tapes” from my personal “stash.” Even more retro than cassettes: Once on my trip I had the chance to listen to actual “LP” “albums” on “turntables,” thoughtfully provided in guest rooms of the ACE Hotel and Swim Club in Palm Springs, California. Festive! Really, who could have known I would have occasion in 2009 to feast my ears once again on a vintage vinyl version of Barbara Mandrell’s “Sleeping Single in a Double Bed”? Honestly, I never would have guessed that, would you? 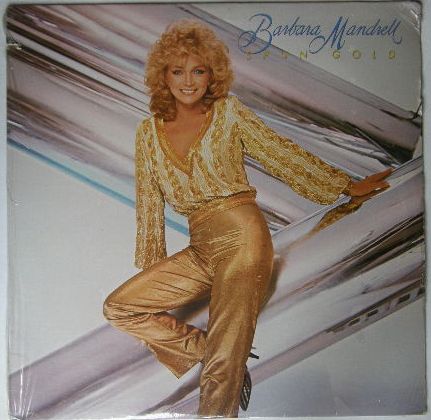 When extreme desert temperatures fried my iPod, and I was traveling too fast from one boondocks to the next to get decent highway radio reception, I relied on my own collection of vintage cassettes—frozen in time on my first cross-country trip the summer of 1989 and thawed out now in the searing noonday sun of this present Mojave moment, on the selfsame butt-scorching front seat of the same old 1967 Mercury Comet convertible that I was driving back then. Sometimes I wonder about me.
One difference between then-and-now recording’n’playback protocols that struck me while listening to those cassettes was the long blank spaces at the end of a side. Remember those, when the playing times didn’t match up, so there was a big ol’ chunk of nothing but magnetic hiss in there at the end of side B? Even the professional tapes had that going on. Oh well, cassettes were an improvement over eight-tracks, which simply gashed your favorite song down the middle. For the record, for my 14-year-old self, that would have been Jackson Browne’s “Here Come Those Tears Again.” (“Baby, here we stand again/Where we’ve been so many times before…”)
This time around, I was on vacation, with no wristwatch and no particular place to go. So, rather than fast-forwarding through the recorded voids on my old cassettes, I let them play through, occasional empty space for thinky thoughts.
First, it occurred to me that the commercial radio stations I had been listening to contained not any tiny fraction of a nanosecond, atall, that was not filled with either music, noise purporting to be music (kids these days…) or breathless jabber. Second, I thought, Hmm, that’s just like the rest of the world: filled up with way too much of the irritatingly insubstantial and the deeply unimportant…. I mean, is it too much to ask that there be just a teensy pause now and then between this barrage of auditory stimuli, just a little space to put in between my thoughts, in order that they might, you know, like, fully form? If you can’t pause, could you at least slow down? Why, nowadays with the Internets and all, not only is every cranny filled with jabber of one sort or another… no, even the spaces behind that are filled with hyperjabber, all too often signifying, at best, not much. Gripe, harrumph….
But I digress. The reason all this occurred to me all over again when I rolled in home to Davidson is that I realized how much I had missed the unhurried, deliberate and dulcet tones of WDAV 89.9 FM Classical Music Radio, a listener-supported service of Davidson College. And I’m not just saying that because station manager Ben Roe kicked in some gas money for some blog entries. That gasoline is long gone, and I’m saying it anyway: WDAV is one of the things that is good for a world that too often ails me. I had listened online to WDAV 89.9 FM Classical Music Radio, a listener-supported service of Davidson College, a few times in my Motel 6 rooms, but through those long miles in the car across Kansas (and Kansas, and Kansas, and…) I missed the station’s presence on the pre-set button of my Pioneer.
Classical music, of course, represents another time, and so another take on time itself, and thus on form, and on content, than the jammed-up overloads of today. But just so: WDAV is a lively, consistent and soothing soundtrack of my workaday world, brought to me by my Bose, my car radio, and the desktop boombox of my officemate Bill Giduz ’74. Plus, lucky me, the people of WDAV are my next-door work neighbors on Main Street in Davidson. We have good fun, whistling while we work, so to speak. I give them my jar of pennies when it’s their fund drive time, and they supported me when it was my fun drive time! (Sorry, that one was too obvious, a little College Relations humor, there….)
So when I do this trip again in 20 more years, here’s hoping that the music delivery systems of that day will mean that I’ll be able to just stream WDAV straight into my car. In the meantime, it’s good to be home.