It’s 9:30 at night in Palm Springs, Calif., and I realize I have had the Southern California classical radio station, KPSC 88.5 FM, on the radio all day. OK, I set it for the dog, truth be told, since classical music on WDAV 89.9 FM is what they play for him at Camp Wagging Tails back home, and what I play for him at my condo while I am at work, on account of his mild (now) separation anxiety. Dulcet tones soothe the savage beast. Seems to work. And besides, who does not want to awaken from their afternoon nap to the sound of applause, hello? Especially now for him, in Dodger’s desert dog-days of summer 2009: too many hard, loud, freaky hours of SoCal freeways in an un-air-conditioned, 42-year-old Comet, with no roof to speak of? Who signed him up for this? OK, I did, against my better judgment. But all is well. 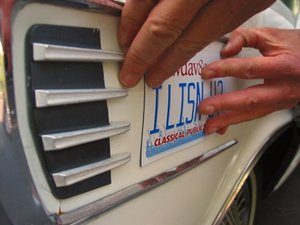 But maybe, just maybe, the dulcet tones of classical music soothe me, too (leaving aside the possibility of my own savagery and beastery). I mean, even reentering the AC atmosphere of my room from the desert’s 114 degrees, I haven’t even thought about turning on the television news channels, and the channel-surf crap behind them, all day long. My great, big TV on the wall is mute, bless its tiny, little heart.
I am no classical music connoisseur, I assure you—although I am able to spell connoisseur on the first try. But there is something going on more elemental here, and more timeless, something that only, well, time itself will tell about the music of our own centuries. Satellite “classic” rock, indeed. Snif. Sometimes I just want a solid rendition, from sixty years ago with vinyl scratches intact, or from right now live tonight in pristine digitation, of Mozart’s Requiem, played, please, to me in a hammock on a screen porch during a loud, scary thunderstorm of the variety that has scared the beJesus out of, and into, humankind for many a moon. And baby, get me a beer while you’re up, it dudd’n git any bettern’iss….
So, you tell me: Does Dodger, pictured here below, look like a day of classical music—okay, with a healthy smattering of Hollywooodish stuff, it’s Palm Springs—at an adult volume has done him wrong or right, here at bedtime at the ACE Hotel in Palm Springs? I mean, he is not even supposed to be on the sheets, y’all, it is written in the rules that I signed on to with my credit card.
Ask him if he cares. 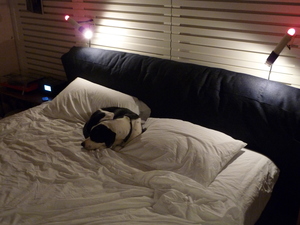