My iPod bit the dust. At a Motel 6 in Kansas, I went to update my hallowed Road Trip playlist in order to delete “Smokin’ in the Boys Room.” The nostalgic novelty of that song, I had found, turns out to be rather paltry. Grating, even. But when, in room 116, I connected my digital drives and mashed “sync,” I received, OMG, a stop-sign, exclamation point, “Error 1429” pop-up warning that my device was “corrupt.” Well!

Now, you might think that corruption would have happened to me sooner. Say, the week before, when southern California’s Mojave desert temperatures in my glove box where the iPod lives surely topped 120 degrees. And what with southern California being, you know, pretty corrupt. But no, this musical corruption was visited upon me and my iPod in Goodland, Kansas. Who knew? Lord, Lord, Lord. 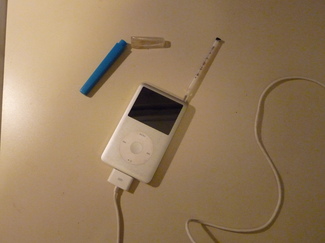 Was it the Mojave Desert or “Smokin’ in the Boys’ Room” that gave my iPod a fever? Or maybe it was Tina Turner’s classic “Nutbush City Limits.” Swine flu?…
In addition to deleting the offensive tune on the Road Trip playlist, I was aiming to upload a new playlist I had selected, more recent stuff than the mostly retro Road Trip melodies, detailed in a previous post. Time to look ahead, or in this case listen ahead, my road-weary thinking now went, to shift my musical aesthetic back into the 21st century for awhile. Leave the past behind, John, even if you leave claw marks in it.
But no, my muscial muses had other ideas. Here I was with no iPod, no CDs (I had uploaded them all to my Mac and then given them away to loved ones), and no prospects this day of a satisfying radio experience (on a 400-mile driving day at 80 mph across Kansas, no stations, such as they are and what there are of them, last for more than three songs). So, I dug into the cavernous depths of the Comet’s voluminous trunk. A Mountain Dew’s worth of sweat, a bumped noggin, and a couple of choice cusswords later, I found the prize I sought. Carefully wrapped in a shop rag underneath the spare tire were two zippered foam-rubber-and-nylon boxes of cassette tapes, most of them dating to a 1989 cross-country trip in this very same car. I opened one and peeped inside to see what I had packed. 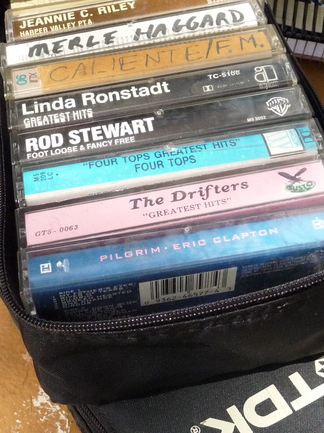 In Kansas, I listened to extant cassettes from days of yore. And listened, and listened, and listened. Sixteen cassettes is not a lot when you are driving across the high lonesome prairie, which, I swear, expands in the heat.
Some of the tapes were store-bought (how quaint!) but the best of them I had recorded myself, on my first real stereo in my first real apartment. Recorded them from vinyl albums, kids, with a diamond-tipped stylus on my strobe-lit, pride-and-joy Pioneer turntable and Toshiba receiver. See, boys and girls, that’s how we “transferred music files” back in the day. Put that in your earbuds and smoke it.
Here are just a few of my thoughts that day:

The lifesaver selection in the pile of cassettes was a compilation of a couple of Hal Ketchum albums, digital versions of which I had already enjoyed several times this trip, but which were now trapped impotent in the sickly iPod. But joy of joys, what once was lost now was found, an analog blast from the past. The cassette’s yellowed label was hand-lettered in my sister’s careful cursive, a long-ago stocking stuffer. Bless you, Sister.
Ketchum usually gets lumped in with country music classification, which is not wholly incorrect. But for my money, he is in a category by himself, an exquisite lyricist whose catchy, original, unhurried melodies he delivers in a rich, mellifluous tenor, with just enough vibrato emotion and even an occasional, sparing, but pitch-perfect soar into falsetto. Hal Ketchum is, in other words, ideal road music. Imagine, if you will, the sound of a long, thin aerial whipping through hot highway wind, and this:
“No Easy Road”
Don’t know where, don’t know when, this road I’m on is gonna end/It’s been my friend, it’s been my sin, my next of kin./Traveled high, traveled low, rain still falls, the wind still blows, one thing I’ve learned, one thing I know, there ain’t no easy road….
or this:
“Mama Knows the Highway”
Mama knows the highway by the song/When she hears a good one, she always sings along/She don’t ever worry ’bout what’s gone, she says good country music, never steer you wrong…. She can tell Wyoming by the wind, she can tell another trucker by the rig that he’s in/She knows where the real South begins…. She can gauge a café just by looking at the sign, little ol’ places always share the grand design….
Or the 1999 tune “Long Way Down” from the album Awaiting Redemption, prescient to our own times in a macroeconomic sort of way, even though it’s really about something else entirely, something very personal and specific and at the same time universal:
Got a silver Eldorado settin’ just outside the door/She’ll burn a little rubber if you put her to the floor/Times are getting tough so we don’t run much anymore/Look out son, it’s a long way down…. Remember my amigos, you are talking to a man who has lived a whole lot longer than anybody planned/As I stand here now before you, with the past at my command, look out son, it’s a long way down.
I even briefly considered trying to track ol’ Hal down. At my next Motel 6, I Googled him to a spread outside of Nashville where he lives with his wife and kids, says Wiki. But, I never have been good at figuring out what to say when I meet famous people—I mean, what, “I just love your work!”?—and I figured he would take me for some kind of stalker fan weirdo, so I decided that we should remain imaginary friends. But here’s big thanks, Hal, for the musical moments sublime.
Um, by the way, you didn’t by any chance corrupt my iPod on that “Long Way Down”?…