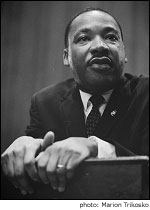 Music in the life of Dr. Martin Luther King, Jr. went far beyond “We Shall Overcome.” You can find the earliest evidence in his boyhood home on Auburn Avenue in Atlanta, steps away from the celebrated Ebenezer Baptist Church, pastored by his father, Daddy King. Dr. King may have been the son of a preacher, but he was also the son of a choir director. When you walk in the King house, the first room you enter is an intimate front parlor, dominated by a battered old upright piano. This is the place where King’s mother would lead the Ebenezer choir through weekly rehearsals, the place where his father first noted four-year-old Martin’s fine, clear singing voice, and where he struggled through piano lessons.

Later, King would take his own place in the Ebenezer choir, join the prestigious Glee Club of Morehouse College, and marry a young New England Conservatory soprano named Coretta Scott. Forever after, it was the distinctly musical style of speaking that made Dr. Martin Luther King, Jr. one of this century’s greatest and most persuasive orators. It’s no accident that his speeches and writings are filled with references to music.
It’s because there is a vital musical core to Dr. King’s life and message that NPR and the Atlanta Symphony Orchestra began the” King Celebration” fifteen years ago. That first concert in 1994 was highlighted by composer Joseph Schwantner’s poignant setting of King texts, New Morning for the World, and concluded with a moving chorus of “We Shall Overcome” as the audience at the Woodruff Arts Center joined hands and sang. Since 1997, A “King Celebration” has been staged in King Chapel at his alma mater, Morehouse College. In paying tribute to Dr. King, the annual concert also acknowledges the important but often-overlooked contributions of African-Americans to what we know as the “classical” music tradition.
As a national holiday, Dr. King’s birthday is still new enough that we have been spared the car sales and mattress ads, and we are still looking for ways to observe the message and meaning of Dr. King’s life. I can’t think of a better way than celebrating it in music–music that inspired him and that he in turn inspired–on stage with a world-class ensemble, the Atlanta Symphony Orchestra, direct from his hometown.

One thought on “Martin Luther King, Jr.: ‘A Musical Celebration’”