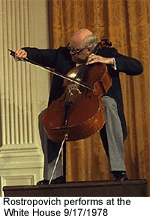 It came as somewhat of a shock to hear of the death of the great cellist Mstislav Rostropovich.
Just a little over a month ago the classical music world honored him on his 80th birthday. On WDAV the observances included a week-long retrospective on Performance Today, heard weeknights at 7.
He had been sick for a while, but unless you were following his life and career closely, you wouldn’t necessarily have known that. And Rostropovich’s persona was always larger than life and seemed invincible.
Rostropovich’s musical significance is indisputable. He’s arguably the greatest cellist of the last 100 years, which effectively means of all time. Even Yo-Yo Ma wouldn’t contest that. And he was almost equally distinguished as a skillful and charismatic conductor.

But with his death, we’ve also lost the last vestige of an era when classical musicians really mattered on the world stage. Like his approximate contemporaries Leonard Bernstein and Isaac Stern, Rostropovich’s influence extended beyond music. He was one of the most prominent dissidents of the Soviet era in Russia, and exhibited extraordinary moral and physical courage by sheltering the blacklisted author Alexander Solszhenitzyn.
Rostropovich’s defection to the west made him an international symbol of the Cold War, but even afterwards, his humanitarian activism marked him as part of a special breed.
We’ll have his recordings to remember his artistry, and there will be other stars as bright in the classical music firmament. But I wonder if we’ll ever see the likes of that kind of extraordinary personality again?
(Find out more about Rostropovich at Performance Today, The New York Times, and YouTube.)