There were two album covers in my father’s collection of mostly classical recordings that held shock value for me as a child. Perhaps it was not so much the cover, but the title on the wide spine of a recording of the rock opera Jesus Christ Superstar that bothered me. Jesus Christ What? Something about those words was embarrassing to me. Nowhere in my eight-year-old mind could I place Jesus among screaming electric guitars and feel right about it. I wanted to turn the album around and face the spine into the back of the record cabinet.
The uneasiness that record caused me was rivaled only by one other: Frank Zappa and The Mothers of Invention’s Weasels Ripped My Flesh.

I could make no sense of it. Turn the album jacket over and matters got worse. There were track titles like “My Guitar Wants to Kill Your Mama” and things about gas masks I didn’t understand. When I learned my father owned this disturbing slice of vinyl for the sake of teaching a course in the psychology of music, I felt relieved.
I look through the CDs in the music library at WDAV and wonder if I could ever experience that kind of shock again. A photo taken in the 80’s of harmonica virtuoso, Robert Bonfiglio, in a pair of upsettingly tight jeans comes close, as does a leggy pose offered by violinist Nadja Salerno Sonnenberg that evokes scenes from the 1983 movie Flashdance. (Remember leg warmers?) 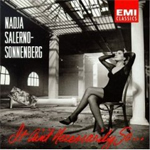 These are, of course, vaguely embarrassing; certainly not shocking. Perhaps they”re evidence classical music marketing went through an awkward adolescence in the late 80’s, early 90’s. Could it be that now, like pop stars, classical musicians feel pressured to look as good as they sound? (Check out the story of soprano Deborah Voigt losing her role in Strauss” opera Ariadne auf Naxos because she couldn”t fit into the little black dress designed for Strauss” heroine. . 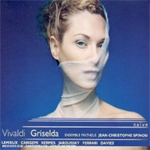 Whatever cover art trend was beginning in Robert”s and Nadja”s photo shoots has evolved into what looks like a complete disconnect between cover art and content. Take, for example, this Vivaldi recording on the French “Naive” label.
Granted, the image of this gauze-swaddled ingénue (no gastric bypass here) is mesmerizing, but what does she have to do with Vivaldi’s music? Both are mesmerizing? Close enough? How about this outrageously-red, lip-shaped contemporary couch used for the cover of a CD of Heinrich Ignaz Franz von Biber”s music? 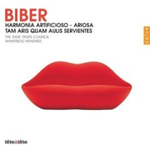 What do you suppose such chic packaging says about us–those whom classical music marketers are appealing to? Perhaps nothing. Perhaps it says something about the new generation of listeners those in the classical music business so desperately want to attract. (For the “uninitiated”, these images are certainly more seductive than Bonfiglio in his tight jeans or a glowering Shostakovich in his thick-rimmed glasses for that matter.) Or, maybe the snug denim, poses that say “dishabille” and contemporary furniture are a sign of how terribly the latest generation of classical musicians and music fans want dibs on some of that “cool” every other musician in every other genre (excluding polka?) seems entitled to at birth. Why, up until not long from now, have we been excluded from that cool? More than likely it”s our own fault. It”s no coincidence that not long ago words like “stuffy” and “elitist” went hand in hand with classical music. Judging by these covers, cool”s going to creep in. It”s inevitable, what with a whole new generation of stars rising. They”re not the same people pictured on the album covers in my father”s collection. They don”t think the same way about themselves, the music they”re performing or the audiences they”re performing for. They don”t think the same way about how their recordings get made and distributed. (Hello, independent labels, cdbaby.com and hello iPod.) It follows they”re not going to want to look the same. I wonder though, what do these sexy new images tell us they (or we?) want from the classical music experience? I love Glenn Gould, grunts, bulky head and all. I think Aaron Copland”s glasses and funky teeth are part of his charm. Sure, it”s nice when we get lookers like Joshua Bell, Keith Lockhart(note the leather), The Eroica Trio or Anna Netrebko on the scene, but I”m digging for substance when I turn to classical music. Do you suppose this image thing is just a passing phase or are we stuck with it? Is “cool” a terrible inheritance from the pop machine that we”ll all have to contend with in order to succeed? What do you see on your CD shelf and where do you think we will go from here? I”d love to hear your thoughts.
–Jennifer Foster

3 thoughts on “Judging by the Cover…”