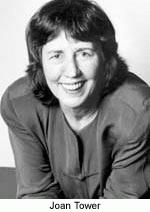 Composer Joan Tower has a work being premiered by the Salisbury Symphony later this month.
She has said that having a work of hers on a concert program next to one by a long-established
composer such as Beethoven is good for Beethoven, because audiences listen critically to her music
and can carry over that critical listening to the Beethoven. Too often they take established works for
granted and just sit back and treat them as something they are required to like.
Do you agree? We”re curious to see your comments below. You can listen to a feature I produced with Joan Tower and Salisbury Symphony Music Director David Hagy by .

5 thoughts on “Do Audiences Listen More Critically to New Works?”