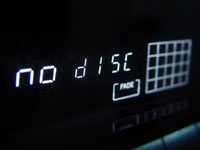 You think countdown, you think NASA. I think countdown, I think WDAV.
In radio, time is always running out. Here’s something I’ll bet you didn’t know: in radio, it takes seven seconds for a fresh silence to wilt into dead air. How do I know it’s seven? I know my seconds. I know my minutes. I’ve been watching counters on CD players four hours a day every weekday for a collected seven years. Like it or not, I have developed an uncanny sense of time. When I tell someone when I’ll be arriving, I tell them I’ll be there at 3:12 p.m. I’ll be right. They’ll be amazed. When my son wants to know how long before dinner will be ready, I’ll answer “seventeen and a half minutes”. And I’ll be right. And he’ll be amazed.

On the job, I know if there are three minutes and twelve seconds of music remaining, I have time to walk from the on-air studio to the kitchen, fill a glass with water, drink half of it, circle by the mail room, pull an announcement off the printer, share a laugh with a co-worker and get back into the studio with fifty-eight seconds left to figure what on earth I’m going to say when the music ends. Forty-two seconds provide just enough time to go online and pull up the pronunciation for a composer’s name you and I have never seen, much less heard. Thirty-three seconds and I can get the current temperature for you instead of fudging it. Which, I confess, I’ve done. Twice.
There was a time at WDAV when on-air hosts answered the telephone. In retrospect, that was a screw-loose idea.
These were not calls we solicited, mind you. They were routine radio station calls which can range from the innocent inquiry to the nuclear meltdown. There were times when forty-two seconds on the CD counter meant I had forty-one to shake off a diatribe by a listener who despised ragtime. Thirty-three seconds might mean bouncing back from a paranoid-schizophrenic threatening to take me to court for talking about him on the air.
Part of me truly misses answering the phone at the station. There were other calls–the “What was that beautiful choral piece you just played and how can I buy it?” calls, the “Did I just hear you say Percy Grainger lived with his mother until she died?” calls–the calls that let me know you were there; that you were thinking about and interested in what was on the air. Pleasant or unpleasant, affirming or deflating, the calls made radio two-way communication.
That’s what this blog is intended to do, minus the distraction of having to watch the seconds tick away. I’m excited about it. It gives me the chance to share more with you about music and about what’s going on in our arts community. More importantly, it re-opens your lane on this two-way street. Fire away. (Easy on the diatribes.) Post comments. Ask questions. Share ideas. As soon as I roll the next piece, I’ll reply. But only when I have at least six minutes and fifty-four seconds of music remaining.

10 thoughts on “An Invitation to Two-Way Radio: A DJ Answers the Phone”